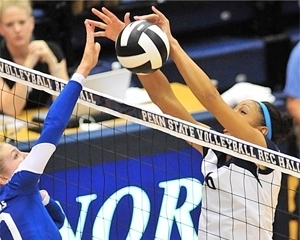 Alisha Glass knows that big dreams do come true even in a small town. An outstanding volleyball player, Glass is a 2006 graduate of Leland High School and is now a senior at Penn State University. She was a featured speaker in the Leland Education Foundation "Insight and Inspiration Speaker Series" on March 11, 2010, while home on spring break.

What did you talk about in your speech?

I spoke about what I’ve done so far and that it’s possible to dream big no matter where you live. Dream big and never limit yourself. Work hard. It doesn’t matter how small the town is. I got to do everything I wanted while growing up in Leland.

How did you end up at Penn State?

I received a full scholarship.

How did the college find out about you?

I played club volleyball starting in Traverse City, then in Big Rapids, then in Grand Rapids. I started young, I was 11 when I began, and was the youngest on the team. I received my first college recruitment letter when I was in 8th Grade. Leland won the state high school championship when I was a senior.

How has the Penn State volleyball team done?

We won our third national championship this year.

Who inspired you when you were growing up?

My grandpa was a basketball coach, and my mom was my volleyball coach at Leland. My whole family has been very supportive. So many people have been part of my journey that it would be tedious to list them all.

How was it having your mom as your coach?

Mom was pretty tough as a coach. She challenged all of us.

What is your major at Penn State?

Kinesiology, with a minor in human development and family studies.

What are your plans for after graduation?

I plan to go to California to train with the national team. The national team competes in tournaments with other countries. My goal is to be part of the 2012 Olympic team.

Are there professional volleyball teams?

Most other countries have them, but not the U.S. Many Americans play on those teams in the fall and winter and return to train with the U.S. national team in the spring. I could have played (abroad), but opted to finish college.

Do you have any last comments?

I’d like to say thank you to the community. I feel their support even here in Pennsylvania. Thank you.