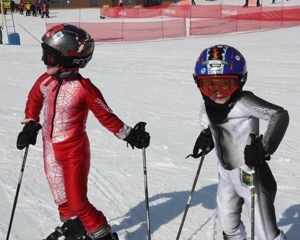 “We’ve got the usual cadre of special spring events, but this year the action is especially fun because it dovetails well with the Olympics. "We’re ready for folks to bring that kind of energy to the race course,” said Jim Bartlett, general manager of Nub’s Nob ski area in Harbor Springs.

Here’s the rundown of Nub’s Nob opportunities to bring out your inner gold medalist:

March 13—The K2 Duals.  Bartlett said the only head-to-head giant slalom racing in the north always brings a big field. The bonus? Every racer is entered in a drawing to win a new pair of skis … So if you can barely make it out of the start gate, you still have the chance to come away a winner.

March 20—The 48th Annual Nub’s Nob Open.  The premier slalom event of the season, this World Cup–style race makes the black diamond run it is set on look like a forest of gates. Win and your name is forever etched on the cafeteria wall.

March 21—Volkl/Marker/Point Six Super G. While this is the culminating event for a seven-race series (as well as a USSA Michigan Masters Race) any advanced skier/snowboarder that is 13 or older is welcome to sign up and fly down the super fast, super technical course on Scar Face—a run that has been known to live up to its name.  A great race for spectators who like to gasp and cheer at Bode Miller–style close calls.

Just across the valley, Boyne Highlands rounds out the month of March will some world class racing of its own:

March 27—Miller Lite Ski League Championship. In addition to being quite the on-hill party, this team event draws the top skiers from around the state to rocket down North Challenger for perhaps the biggest prize of all … serious bragging rights.

March 28—Boyne Highlands Downhill. Bombing a ski hill from top to bottom in a tuck is against the rules every other day of the season, so speed demons definitely unite for the one annual race that makes turning almost optional.  Young skiers and the extra seasoned (ahem, elder) veterans ski a slightly less scary course, and those who sign up to ski pro have the extra incentive of winning cash if they land on the podium.

For more information or registration times, visit nubsnob.com or boyne.com.