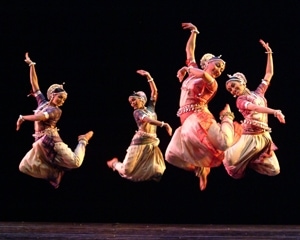 The Dennos Museum Center at Northwestern Michigan College will present the Nrityagram Dance Ensemble in collaboration with the Wharton Center at MSU on Saturday March 20, 2010 at 8:00 PM in the Milliken Auditorium. Tickets are $25 in advance, $28 at the door, $22 for Museum Members. Tickets may be purchased by calling the Museum Box office at 231-995-1553 or on line at www.dennosmuseum.org.

The Nrityagram Dance Ensemble is much more than just a dance company.  It is a crucible of inspiration and ideas, a coming together of creative minds.  It is a space where dancers, musicians and choreographers live together for years, developing their skill, perfecting their technique and complementing their learning of dance with a study of mythology and the epics, Sanskit and yoga, meditation and the martial arts.

With exceptional synchronicity, compelling physicality and emotional honestly, the ensemble has earned national and international acclaim for its ability to redefine both dance and theatre, to create and communicate with powerful imagery and captivating movement.

Dance Magazine writes, “the ensemble mesmerized a sold-out audience with its artistry, energy, technique and beauty.”  The New York Times adds, “One of the most luminous dance events of the year!”

Rising with the sun and setting with the moon, their lifestyle is based on the traditions of Gurukul.  Along with intense dance training, as students look after their Gurus, they learn priceless knowledge about Indian music, history of dance, spiritual thought and dance theory.  The learning continues with Indian Literature, mythology, poetry, Sanskrit, aesthetics and philosophy.  Not only are they mentally educated, but martial arts, yoga, mime, meditation, and sculpture is also part of their daily routine; this keeps their synergy between the mind and body.

Nrityagyan is the dance education program that they follow which assists in the preservation of Indian Classical Dance.  It is conducted to expand the audience of this art form as well as open the eyes of dance students through demonstrations.The Village Voice describes Nrityagram as “enigmas: maddening, fascinating!”

In addition to the public performance, the Nrityagram Dance Ensemble will be performing two concerts during the day for schools in Milliken Auditorium on March 19. For more information contact Diana Bolander at 231-995-1029.

Opening in association with the dance concert will be a photographic exhibition on Varanasi, India by Chicago based photographer Larry Snider. An exhibition preview will take place at the Dennos for concert goers from 7 – 8 pm before the dance concert. Reception entertainment will be offered by the  Sitar/Tabla Duo of  Greg Vadnais – Tabla and Chris Bontos – Sitar from Boyne City.

The Dennos Museum Center concert season is supported in part by a grant from the Osterlin Performance Endowment, and the Robert T. Hughes Family Trust. WNMC 90.7 fm and TV 29&8 provide media support. The Nrityagram Dance Ensemble concert is supported in part by the Traverse City Area Chamber of Commerce as part of the Dennos Museum Center’s Global Diversity Series and is made possible in Traverse City by the Wharton Center for the Performing Arts at MSU. The ensemble is being housed courtesy of Cambria Suites of Traverse City.

The Dennos Museum Center is open daily 10 AM to 5 PM, Thursdays until 8 PM, and Sundays 1-5 PM. Admission is $6.00 adults, $4.00 for children and free to museum members. For more information on the Museum and its programs, go to   www.dennosmuseum.org or call 231-995-1055. The Dennos Museum Center is located at 1701 East Front Street, Traverse City, MI 49686, at the entrance to the campus of Northwestern Michigan College.