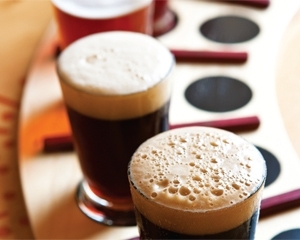 Brewing companies from Traverse City to Whitefish Bay are celebrating the month of March brewing beer sure to make your St. Patrick’s Day tasty. Northern Michigan in March? You betcha! We’re up for anything that gets us off our slippery driveways and into a pub at the end of winter. St. Patrick’s Day? Party! March Madness? Party! Lent? Par-tay! Our advice: Join in. Choose a favorite Northern Michigan brewpub, reserve a room nearby, and make it a getaway.

There’ll be no green beer at Short’s Brewing Company in Bellaire this March, but you will find plenty of inventive flavor combinations. The brewers are returning to their roots this late winter, making experimental beers with intense fl avors (in a good way). This month they’ll feature Uncle Steve’s Stout and an ever-lucky Irish red, along with the Magician brew, which is headed into bottles for the fi rst time. SHORTSBREWERY.COM.

Chase a leprechaun over to Bellaire Bed & Breakfast for a full Irish meal and Irish-themed murder mystery weekend, featuring you and your mates as cast members, BELLAIREBANDB.COM.

Temptation of the Yooper Brew

Spend some days of Lent snowmobiling in the Upper Peninsula, and be tempted by the Tahquamenon Falls Brewing Company in the Tahquamenon Falls State Park. Opt for the fresh Lake Superior whitefi sh on Friday, and pair it with the Lumberjack Lager. For red meat-eaters, the brewery features homemade pasties—get one with the Falls Tannen, which brewers boast is the same color as the river water. SUPERIORSIGHTS.COM/TAHQFALLSBREW.

For a chilly thrill ride before winter’s last gasp, head over to the snowmobile and cross-country ski trails that link the Tahquamenon Falls Brewing Company to Yooper civilization in Paradise. After checking out the ice formations at the falls and doing some early spring birding, rest at the Cloud Nine Cottages on Whitefish Bay—glorious sunrises and private lodging right on the water. 906-492-3434.

Where better to celebrate your own brand of March Madness than at a brewpub that honors the creative side of the brain? Right Brain Brewery in Traverse City will be heavy in stouts and surprises this month, as brewer John Niedermaier concocts unexpected beers, and the crew serves them up next to local treats. Test your sanity on Trivia Tuesdays from 8 to 10 p.m.; five friends make a team for this hosted event. RIGHTBRAINBREWERY.COM.

North Peak Brewing Company in Traverse City taps its inner Celtic with a March-long Irishfest (through March 26, purchase a house-brewed beer in an Irish beer glass for $5, keep the glass and bring it back for $3 refills). You might want to order up a steaming dish of corned beef & cabbage or a slice of shepherd’s pie to go with. And don’t miss the biggest St. Patrick’s Day bash in Traverse City and maybe in all the North at North Peak Brewing Company and its Irish twin Kilkenny’s, downstairs. NORTHPEAK.NET.

March yourself back to the Park Place Hotel, and use your smarts to ask for the $89.95 weekday special. Analytical left-brained thinkers will opt to eat at the hotel’s Minerva’s restaurant, offering an Irish menu in March. PARK-PLACE-HOTEL.COM.