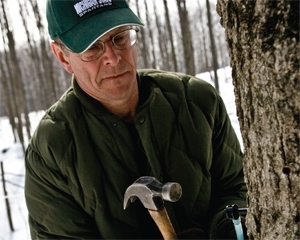 Making pure maple syrup on one of Michigan’s maple syrup farms certainly comes with a dose of the romantic, but sheer hard work and perseverance are required in far greater measure.

Case in point: At 3 a.m. on a night when the temperature hovered just above freezing last April, Art Currey, an owner of Currey Farms Pure Maple Syrup in Charlevoix, muscled his yellow all-terrain quad up and down the icy, muddy hills of his 35-acre sugarbush south of Charlevoix. While his wife, Jan, half-slept and half-worried in their farmhouse bedroom, Art dodged 15 miles of crisscrossing blue tubing and ducked a pelting thunderstorm that popped off flashes of lightning framed by bare maple branches. That was the bad news.

The good news was that the farm’s thousands of maple trees were gushing sap like faucets turned full on. “Everything was flowing,” Art remembers.

Art’s mission that night was to guard the mother lode’s free flow from tree to tap to line to collection vat to sap house. If a squirrel nibbled a tube, if a bumbling deer took out lines, if the pump failed and the collection vat overflowed—labor and money would disappear into dirty snow.

While maple syrup season also has its share of peaceful, sun-dancing-on-snow moments, turning sap to syrup is generally hard work. And certainly Art and Jan—who is a registered dietitian—could have found a less physically demanding way to spend their semi-retirement after Art sold his large-animal veterinary practice in Fowlerville, near Lansing, five years ago.

But instead of, say, heading to Florida for the winter, he signed on to work 10 months a year as a clinical instructor at Michigan State University’s College of Veterinary Medicine in East Lansing. During March and April the couple would head North to restart the maple syrup operation that Art’s parents, Robert and Betty Currey, operated in the 1970’s on their 320-acre Charlevoix-area farm. Betty Currey, Art’s mother, still owns the farm and lives there year round in her white gabled farmhouse.

With typical high-octane energy, Art forged an ambitious business plan that put Currey Farms Pure Maple Syrup among a small number of the biggest commercial producers in the state. Last spring, the business’s fourth season, 1,700 gallons of top-quality syrup flowed from the farm, sweetening breakfasts around the Midwest and beyond—and pushing Art’s business plan six years ahead of schedule.

But the pleasure derived from gathering with family and friends for the syrup harvest is an equally important byproductof Currey Farms. At various points in the syrup season, from the end of February to the end of April, as many as 20 people from all over the country and the world assemble at Grandma Betty’s country farmhouse to roll up their sleeves and lend a hand.