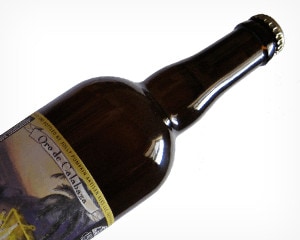 Folks in Belgium have been brewing beer since the Middle Ages (hence the namesake brews), but they are tipping their proverbial mugs toward Michigan this week. Thanks to a first place win in The New York Times blind taste test for the best Belgian-style golden ale, brew king Ron Jefferies—and his Jolly Pumpkin Oro de Calabaza—put Michigan on the map for beer aficionados from all over the globe.

While Oro de Calabaza is actually brewed in Dexter by Jefferies, it has ties to Northern Michigan via the Jolly Pumpkin Restaurant and Brewery in Old Mission Peninsula’s Bower’s Harbor Inn in Traverse City.

“It has this incredible spicy flavor that comes from wild yeast,” said Jolly Pumpkin’s head chef, Paul Olson. “It is aged in whiskey barrels and I have to say, there is something magic that happens in the process. It is one of those beers that just makes you say ‘wow.’”

Get your own liter of the world’s best Belgian golden ale at the Jolly Pumpkin in Old Mission. Combine it with the brewpub’s short ribs and risotto for one award winning meal.

As if that’s not enough fame for Northern Michigan brews, check out how the Leelanau Brewing Company’s Good Harbor Golden Ale fared in the same blind taste test.