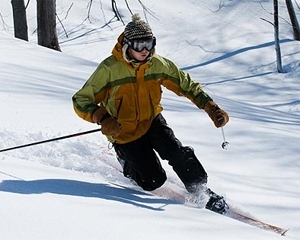 Free your heel, free your mind. Sleeping Bear Telefest is an annual tradition that brings Telemark enthusiasts together to ski the mountain, take part in the largest “Tele Turn” of the season and share the sport with others.

Day’s Activities…Sleeping “Bear-on” & “Bear-oness” Tele Race
at the King/Queen of the Mountain Triple Threat Challenge.Event schedule to be posted at the base of the Buck chairlift on Sunday morning.

KING/QUEEN OF THE HILLTRIPLE THREAT CHALLENGE!

Crystal Mountain Resort & Spa, SUNDAY, MARCH 14, 2010 – 12:30pm
For those who can do it all, the Triple-Threat Challenge requires one run each on alpine, snowboard, and tele skis through the race course. Winners to be crowned Queen/King of the Hill.
King/Queen of the Hill- Alpine/Snowboard/Telemark

Duke/DutchessAny two-combined times. You can do all three and we score the best two.

Kids (15 & under) who complete a run in any course on more than one discipline.Medals awarded. Sleeping “Bear-on” & “Bear-oness” Tele Race

Join over 100 telemark skiers for a day of fun, racing and good food at Nub’s Nob. The Outfitter will be on hand with all the latest telemark ski equipment to demo. Boots to skis and name brands you love. 231-526-2131; nubsnob.com.