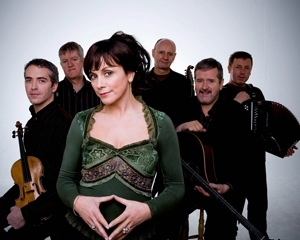 The Dennos Museum Center at Northwestern Michigan College will present Dervish from Ireland on Friday, March 12, 2010 at 8:00 PM in the Milliken Auditorium. Tickets are $25 in advance, $28 at the door, $22 for Museum Members. Tickets may be purchased by calling the Museum Box office at 231-995-1553 or on line at  www.dennosmuseum.org.

From the Great Wall of China to packed auditoriums in the Holy Land to being the first Irish band to perform at the great music festival, "Rock in Rio" on front of an estimated audience of two hundred and forty thousand people, Dervish have come a long way since their formation in 1989. It was then that a group of five musicians, Liam Kelly, Shane Mitchell, Martin Mc Ginley, Brian Mc Donagh and Michael Holmes came together to record an album of local music released as The Boys of Sligo. Inspired by the project they became a working band under the name Dervish which was chosen as it related to any group of spiritual people who become enraptured by music.   In 1991, Roscommon born singer Cathy Jordan and all Ireland champion fiddle player Shane Mc Aleer joined the band to produce the first Dervish album Harmony Hill which was released in 1992. The album won widespread critical acclaim being described as “a landmark Irish traditional album” and placed Dervish in the forefront of the bands working on traditional Irish music.

Dervish soon became one of the most sought after acts on the live music circuit worldwide. They have continued to remain so over the years. Now, under the sponsorship of WCMU Public Radio’s Our Front Porch Series, Dervish comes to Traverse City at the Dennos Museum Center.

With the purchase of a ticket to this performance, concert goers are invited to visit the museum’s galleries one hour before the concert and attend a post concert reception with the performers.

The Dennos Museum Center concert season is supported in part by a grant from the Osterlin Performance Endowment, and the Robert T. Hughes Family Trust. WNMC 90.7 fm and TV 29&8 provide media support. The Dervish concert is supported in part by the Traverse City Area Chamber of Commerce as part of the Dennos Museum Center’s Global Diversity Series.

The Dennos Museum Center is open daily 10 AM to 5 PM, Thursdays until 8 PM, and Sundays 1-5 PM. Admission is $6.00 adults, $4.00 for children and free to museum members. For more information on the Museum and its programs, go to  www.dennosmuseum.org or call 231-995-1055. The Dennos Museum Center is located at 1701 East Front Street, Traverse City, MI 49686, at the entrance to the campus of Northwestern Michigan College.