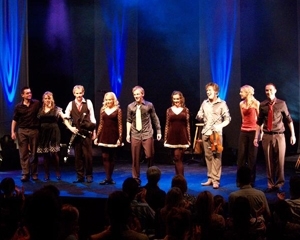 The Irish musical group, incorporating seven world-class musicians playing over twenty instruments on stage, have revolutionized live Celtic music. The group staged its first U.S. season last year, selling out every single stop on its tour. This year’s tour has been expanded to include even more music, dancing and Celtic elements in each show. Audiences can expect a lively blend of traditional Irish music with cutting-edge arrangements and modern influences.

Local collective Grand Traverse Pipes & Drums will also perform at the event. The band has performed at numerous area parades, festivals, concerts, and special events, as well as having served as the Governor’s escort on several occasions.

Tickets for the concert are $22 in advance or $25 at the door, and can be purchased at the City Opera House and at porterhouseproductions.com. Doors open at 6:00 p.m., with the event starting at 7:00 p.m. Seating is general admission and open to all ages.