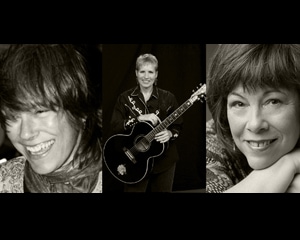 Frozen in February despair? Freshwater Studio in Boyne City just may have a cure for the midwinter blues: “Wine, Women, Chocolate and Song,” a Valentine’s Day concert featuring three powerhouse women performers—Robin Lee Berry, Claudia Schmidt and Mary Sue Wilkinson—and a wine and chocolate tasting on Sunday, February 14th.  MyNorth talked with singer-songwriter Robin Lee Berry about the event that aims to thaw your soul, tantalize your taste buds, and renew your spirit.

MyNorth: How did this show come together?

Robin Lee Berry: Gotta believe it was my husband, Tony William’s, idea. (Tony and Robin co-own Freshwater Studio, an art gallery in Boyne City.) He thought we needed to do something for Valentine’s Day. It’s a big day in town, a lot of things happening, many of the other stores are doing events.   So we felt we would just raise the bar a bit and have a concert, too.

MyNorth: Are you friends with the two other women you’ll be performing with?

Robin Lee Berry: We have all been friends for some time. I met Mary Sue Wilkinson with the band called Iowa Rose and the Riff Raff. They were out of the Leelanau Area. I met her 25 years ago, I believe. She’s now in a band called Sister Wilene, which is a country swing band. She’s going to be singing solo with Claudia and me at the concert, but in April, Sister Wilene will be giving the last show of this year’s concert series here at Freshwater Studio. I’ve known Claudia Schmidt for a very long time. When I first saw her, she was doing a preliminary concert in 1981 for the Blissfest music organization in a bohemian settlement in the Jordan Valley. She brought me to tears with this song called “Hard Life.” It’s an extraordinary song. She really made an impression on me. We’ve crossed paths a few times at other concerts, and I’ve had a chance to sing with her, although it’s like standing in front of a freight train! The song “It’s a Sin to Tell a Lie” is meant to be sung as a duo. But it was literally like trying to jump on a freight train when I sang it with her. So I’m looking forward to this chance to actually sing with her again.

MyNorth: Have the three of you performed together before?

MyNorth: So all of you sing.. … but do all three of you play instruments, too?

Robin Lee Berry: Claudia plays guitar and dulcimer and several other instruments. Mary Sue plays guitar. I play guitar and piano and I’m going to bring along my fiddle.

MyNorth: This isn’t just a concert. There’s a wine tasting and other events, too.

Robin Lee Berry:  Yes, and the beautiful part is that the community is responding to what we’re doing here at Freshwater Studio. We had so much success with the last two concerts. Ticket sales for this one are picking up with pretty good speed. So many people this time of year have despair written into their underwear: you know, what happens in February: Monday, Tuesday, Wednesday, Despair! But winter’s flying by here. The little stunts that Freshwater Studio is doing are helping to keep the lights on in Boyne city. Plus, Mackinaw Trails Winery came to us and said, “We want to do wine tasting events.” So they’re part of it, too.  220 Lake Street Restaurant has offered to do hors d’oeuvres. So we’re going to be wine tasting starting at 5:30 p.m., and then Kilwin’s in Boyne City is bringing two flavors of fudge to taste. At 7 p.m., Ruby Williams, my daughter, is going to sing a couple of tunes to open the show. Several other businesses in Boyne City like Red Mesa, Inspired Living and  Cindi Franco’s Cool Stuff are also giving discounts for ticket holders. We’re really thrilled by all the response. It’s so cool to see this creative energy override the midwinter gloom and doom.

Also…Celebrate Valentine’s Day with a MyNorth Passion Brew, a special brew created and served at four Northern Michigan Brew Pubs and help out the Father Fred Foundation at the same time!
X
X