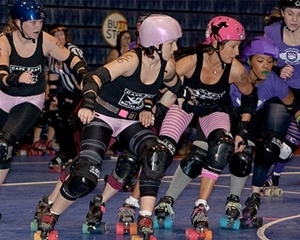 Look out boys, there’s a new game rolling into town. And the founding members of the Traverse City derby team are quickly proving they’re a force to be reckoned with.

Originally started as a dream of Lori Piggott and marketed grass-roots style, the team has grown like wildfire in the past few weeks. Dozens of girls are lining up for their chance to prove they have what it takes to skate with the best.

“The response to a roller derby team in Traverse City has just been amazing,” says Piggott. “Everyone I talk to thinks it’s the coolest thing, and most women either want to join the team or have offered help in some other way.”

And right now, help from the community is exactly what this team needs. Piggott explains that while the interest is there, the biggest challenge these skaters will have to face is finding a place to play.

“Traverse City’s only roller rink has been shut down for years, and the space where it once stood is now occupied by Streeters. We’re currently searching for any 50’ x 100’ open space, be it wood flooring or concrete,” says Piggott. “These girls are tough, and they have the drive and desire to play, so I’m hopeful that we’ll be in a space and practicing by March.”

That sentiment is echoed among dozens of women that show up every Wednesday night from 6:30 to 7:30pm at Cherry Republic to discuss the latest happenings, brainstorm and work on building a team from the ground-up.

“There’s nothing like this anywhere in Northern Michigan, “says Jaclyn Eikey. “These women are committed to making this happen, and when you get a group of tough, strong-willed females together like this, you can almost count on the team lacing up for their first bout in September.”

“It’s a rough, physical sport. You have to have speed, agility and brute strength to be successful,” explains Piggott. “But most importantly, you have to have the desire.”

And for this club, desire is something they come by naturally.

The team is holding a contest in regards to a name for the organization. The community is urged to participate by sending their entry to tcrdname@gmail.com or by visiting a Cuppa Joe location (more locations to be listed soon). The contest ends on March 12. The winner and new name will be announced at the team’s launch party on Saturday, March 13 at 7 PM inside Right Brain Brewery.

About the Team
The roller derby team was started as a dream of founding member Lori Piggott in 2010. Marketed grass-roots style, the team has been growing exponentially with September 2010 start date in the wings. The team will be an official member of the Women’s Flat Track Derby Association (WFTDA). Find out more about the team, updates, and info on how to help visit: https://www.facebook.com/group.php?gid=292339162994&ref=mf or email traversecityrollerderby@gmail.com.