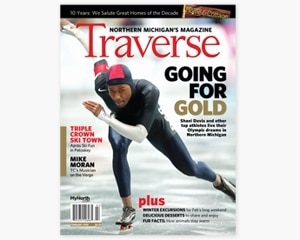 Past, present and future Olympic athletes, many of whom will be competing in Vancouver this month, have carb loaded on the pad Thai at Aoy’s in Marquette, Michigan. They’ve spent hours running the trails at Presque Isle, blasted around Blueberry Ridge a thousand times on XC skis or passed days on blades spinning loops around the ice track in the Berry Events Center. They’re Olympians who have trained in or raced in or lived in or studied in Marquette, and you will see some or all of them beamed in HD from Vancouver this month. Here’s a primer.

Speedskater Shani Davis, the first black athlete ever to win a gold medal in an individual event at a Winter Olympics (gold in the 1000-meter in Torino), is expected to add more golds to his count in Vancouver. As the reigning world champion and record holder in the 1000- and 1500-meter events, Davis is looking like a bionically sure bet.

The skater broke from training recently to wax nostalgic about Marquette—the city he’s called a second home since living and going to school here while training at the United States Olympic Education Center off and on beginning in 2000.

When was the last time you were in Marquette?

I was in Marquette for the short track Olympic trials, which were held sometime in September of ‘09. I was at the time training in Milwaukee, and I decided to drive up and watch and support my fellow teammates.

What do you miss most about living in Marquette?

I really miss the atmosphere and the seasons of Marquette. I love the changing weather as well as the Superior Dome that sticks out from the lakefront. I miss the water, the beautiful lakes, and I hate to admit, but I also miss the schooling. I went to school and took classes there since high school, and I hope to someday continue my education and hopefully finish my studies as well up there. I miss the food, too. Especially the Rice Paddy!!

The owner of the Rice Paddy, Aoy LaChapelle, is a good friend of yours. Care to share what you order when you stop in to see her?

Ever since my second mother, Aoy, and I became close, I don’t order. I usually just show up, sweep the floor and let her work her magic in the kitchen.

Do you stay in contact with the staff at the Olympic Education Center?

Actually from time to time I will get a call or email out of the blue from Tony Tollefson [academic coordinator at the USOEC]. I wish we talked more and stayed in touch, but I always know they are a phone call or an email away. So if I ever need anything from them, I know that they wouldn’t be hard to find!

For more on Shani Davis, read “Shani Davis Loves Marquette and Marquette Loves Him Back.”

Vancouver marks Kimberly Derrick’s second Olympics, following her debut in Torino, Italy, in 2006. Short-track skating observers predict that her best medal possibilities are in the 1000-meter (ranked 3rd in World Cup standings) and 1,500-meter individual races and the 3000-meter relay. Derrick was born in Arkansas (the first person born in the state to compete in a winter Olympics) and moved to Marquette to train at the USOEC when she entered college.

She spent four years in Marquette, earning an elementary education degree and emerging as one of the top U.S. short track women’s skaters. Derrick’s first Olympics were marked by the sudden death of her grandfather in Torino where he had traveled to see her compete. He was one of the central people in her life, and he died just hours before she raced. Look for her to be in top form this year.

Reutter is making her first Olympic appearance this year, but short-track skating insiders are expecting great things from this 21-year-old who hails from the same hometown (Champaign, Illinois) as legendary women’s skater Bonnie Blair. Reutter even credits Blair with having a role in Reutter’s moving to Marquette to train at the United States Olympic Education Center when she was 16.

She heard Blair speak at a high school symposium, and her stories helped Reutter realize she had to step up her commitment to the sport if she was going to succeed, so she worked hard to qualify for the USOEC program in Marquette. Accepted in 2005, she was the youngest skater in the program at the time. The training regimen quickly paid off and shortly after arriving in Marquette, Reutter won the Junior National title.

Reutter trained in Marquette until 2007, when she moved to the training center in Utah. Reutter still trains with Kimberly Derrick, whom she met and lived with in Marquette. Reutter heads into the 2010 Olympics ranked No. 2 worldwide in the 1000-meter.

Arguably the most famous U.S. skater today, especially after he won the Dancing with the Stars competition back in 2007—Apolo Ohno never went to school in Marquette but has trained often at the USOEC, so Northern Michiganders can claim a heartfelt bond with the Seattle native with the famous soul patch.

This is Ohno’s third Olympics and he’ll be striving to become the most medaled winter Olympian in U.S. history (Ohno has five medals, Bonnie Blair has six). This fall, at the Olympic trials in Marquette, skate fans and locals were treated to Ohno and fellow skate star Shani Davis kicking back in this low-key Lake Superior port town. One of their favorite eat spots: The Rice Paddy. Restaurant and head cook Aoy LaChapelle said she cooked special meals for Apolo, because he is on a very strict diet: steamed fish, steamed wild rice and steamed mushrooms. “I cook whatever is good for him,” she says.

Pete Vordenberg was an NCCA Nordic ski champ when he skied for Sten Fjeldheim at Northern Michigan University, competed at the 1992 Olympics and is now the head Nordi coach for the 2010 Olympic Nordic team.

What should the average Olympics viewer look for when watching the U.S. Nordic team compete in Vancouver?

What’s the single most important thing you want a reader to know about the U.S. Nordic team at this year’s Olympics?

The only thing more important than winning a medal is how we will win that medal. We will not cheat or use any illegal methods or drugs, we will not endanger the health of our athletes, we will work hard, work as a team, and we will win as a team.

How about a general impression from living and training in Marquette?

The landscape of a place forms the people that really live in it. You can go to school or live in a place, but if you don’t get out into the area you could be anywhere. In Marquette and the U.P. if you got out in the wild like all skiers do, you will be formed by a beautiful and rough landscape. It is a hard place any time of year and also a beautiful one any time of year.

When you trained off-snow in Marquette, what was a favorite route?

I can remember in vivid detail single training sessions from the early 90’s. I can see moments from rollerski workouts like they are happening right now, see mental images from runs with my teammates in the early mornings before class. I can’t tell you a favorite route because the favorite part was not the route but the teammates I shared the route with. The area was and is special, but my fondest memories are the people I explored the area with.

What was your favorite cheap Friday night food place in Marquette?

The caf [NMU cafeteria]. For me and my friends there were not too many nights out. We ate caf food and a lot of it. We could stretch a dinner into a few hours and five or more trips to the food line. Yeah, I loved the food. There was always a period of time in the fall where your guts had to get used to it, we called it caf attack, but after that it was pure joy. Seriously.

Olympic athletes coming out of Marquette generally develop in one of two programs: either the cross country ski team at Northern Michigan University or the United States Olympic Education Center. The success of the NMU cross-country ski program—a traditional collegiate athletic team—is largely attributed to coach Sten Fjeldheim, a low-key competitor with a renowned sense of humor who has an eye for individual potential and an understanding of how to build team cohesion in an individual sport. He has also coached the U.S. Ski Team, the Olympic Nordic team and the Junior National team. The Olympic Education Center, launched in 1985, is part of the official Olympic athlete development program, which has four such training centers around the United States.

The Marquette center trains short track speedskating, boxing, Greco-Roman wrestling, weightlifting, and women’s freestyle wrestling, and it is the only center based at a four-year university—important for athletes wanting to attend college while training. Younger athletes typically attend high school in Marquette public schools. Athletes who trained here have won more than 80 Olympic medals since the center’s inception.