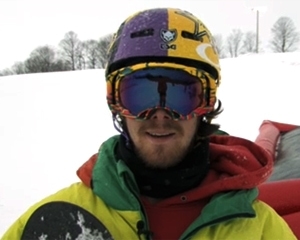 In this snowboarding video, MyNorth.com catches Olympic snowboarders from Finland and Spain practicing snowboarding tricks at Otsego Club and Resort in Gaylord in anticipation of the Vancouver Olympics. Olympic teams began arriving in January from Japan, New Zealand, Switzerland, the U.S. and more. Teams came both because Otsego has formed one of the few Olympic-size half pipes in the country and because Marc-Andre Tarte was there with his Acrobag, an inflated landing pad.

A snowy winter helped the Michigan ski resort as it worked tirelessly to form the 22-foot half pipe, building up roughty 4 million cubic feet of snow before they could begin shaping the snow into a half pipe. Working with Otsego Club staff and a team from the Oregon company Planet Snow Design, Trent Spanbauer from Salt Lake City led the effort to cut the half pipe into shape using the new 22′ Zaugg Pipe Monster, a tool used by the X Games and other world-class events since 2003.

When not on the half pipe, the athletes took advantage of the Acrobag, a giant, air-filled landing pad, designed by stuntmen and adapted to accommodate the sharp edges of snowboards. The Acrobag allows the snowboarders to push themselves to try new snowboard tricks with less worry about injury. Tarte, a Canadian and professional snowboarder himself, brought the Acrobag to Gaylord so that Olympians from all over the world would have the opportunity to practice the latest snowboard tricks with less fear of injury this close to the 2010 Olympic Games.

Pekka Koskela, Coach, Finnish National Olympic Team shares how delighted the teams have been with their Otsego Club experience, noting that many places they train they have very long rides back up the mountain. In Gaylord, the runs are shorter and so the snowboarders get many more "fronts" in a day. Otsego has proven an outstanding location for the Olympians to practice their technical skills with very little hassle or time loss.

The Otsego Club made the commitment to add the Olympic-sized half pipe three years ago and committed $100,000 to the effort. According to Kip Driver, the Otsego Club’s race program director, it was a really big decision, but as he told the Detroit Free Press "it has worked out amazingly well. And as the teams we have here now spread the word, I think we’ll see a lot more of the top riders training here in the future."

Judging from the enthusiasm from these riders challenging themselves then landing softly in the Acrobag, Otsego Club’s gamble has paid off and will undoubtedly attract snowboarders looking for an outstanding half pipe experience well into the future.

More on Hitting the Slopes