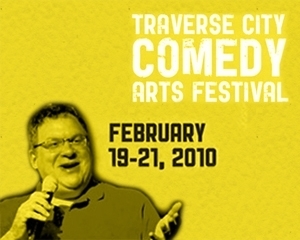 Northern Michigan get ready to laugh your blues away. From Martin Butler on February 12 to the first ever Traverse City Comedy Arts Festival, February 19-21, Traverse City promises to be on fire with funny.

InsideOut Gallery is at it again. Together, owner, Mike Curths and Jenn Price of Bound to Be Heard Productions bring more edgy comedy to the confines of the Warehouse District. On February 12 at 8 PM, Martin Butler will grace the stage at 229 Garland Street with his intelligently low-brow style that celebrates vice and excess.

Butler is no stranger to the comedy circuit. In 2008, he was handpicked by Bill Bellamy and the producers of NBC’s “Last Comic Standing” to represent Detroit. Besides sharing the stage with Dave Attell during Comedy Central’s “Insomniac Live Tour”, he has also performed with Lewis Black, Greg Giraldo, and Doug Stanhope.

The InsideOut Gallery is located at 229 Garland Street in downtown Traverse City. Admission costs are $10 in advance, and $14 at the door. For more information, please visit Insideoutgallery.com.

Click here to read the who, what, where and when on the Traverse City Comedy Arts Festival—brought to you by Michael Moore and Jeff Garlin.