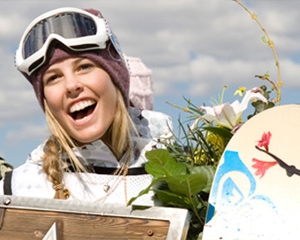 Bright was one of a slew of Olympians from around the globe that trained for more than two weeks in the O-Park at Gaylord’s Otsego Club— the only 22-foot half-pipe east of the Rockies—before heading to Canada to compete in the 2010 Winter Games. “We were pretty excited to see how well she did, knowing that she was here when she was training for that run,” said Otsego Club manager Kris Klay.

“When the Olympians arrived to train here, I think the first thing they experienced was complete surprise. They all wanted to know where the hill was,” Klay said with a laugh. “When they saw the facility tucked behind the main lodge, however, it was another story.  They loved the pipe, the chair to service them that was right there too, and the fact that they would be able to get a lot of training in to step up their routines before the big games. Obviously, that worked out pretty well.”

So well that the Australian national team has already committed to returning to the Otsego Club from March 1-March 14 to train for the U.S. Open at Stratton Mountain in Vermont. “We aren’t sure which team members are coming, but we know there will be a lot of athletes here training for that event, including parts of the U.S. team as well (although not Shaun White, who has a private training facility).  It is a great experience to watch athletes of this caliber,” Klay said.

For more information on the O Park, visit otsegoclub.com.