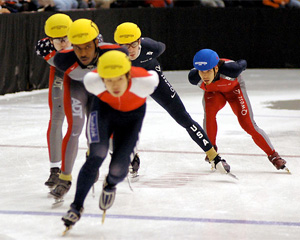 Shani Davis, Long Track Speedskating
After pulling out of the 500 and placing 11th in the 5000 meter, Marquette High School graduate and Northern Michigan University student Shani Davis skates in the men’s 1000 meter at 7 p.m. Davis will go blade to blade with his teammate and 2006 Turin nemesis, Chad Hedrick.

Update: Davis did it! Back to back golds in the 1000 meter—first in Turin, now in Vancouver. Thanks for the Olympic moment, Shani. Northern Michigan loves you! Marquette is celebrating its favorite-son speedskater tonight!

Apolo Ohno, Short Track Speedskating
Our short track speedskating hero and frequent competitor on Northern Michigan University’s Berry Events Center ice picked up a silver in the men’s 1500 meter last Saturday—bringing his Olympic medal count to six, meaning he is tied with speedskater Bonnie Blair for most medals ever won by a US winter Olympic athlete. Apolo has three more events at the Vancouver games to pass Blair and become the most decorated speedskater of all time. He’ll compete tonight, starting at 5:30 in the men’s 1000 meter, followed by the men’s 500 meter. At 5:47, Wednesday, February 24, he’ll skate in the men’s 500 meter.

Update: Ohno glided his way into the men’s 1000 meter finals on Saturday night. Congratulations Apolo! Aoy will be dishing you out an extra big portion at The Rice Paddy the next time you are in Marquette!

Nick Baumgartner, Snowboard Cross
For a moment it looked like Iron River native and former Northern Michigan University football player Nick Baumgartner was headed for the quarter-medal round of the men’s Snowboardcross competition on Monday. But a crash seconds before the finish left him with a (still admirable!) sixth place. When the Olympics opened Baumgartner was ranked 5th in the world.

Read about these top 2010 Winter Olympic athletes who have lived, worked and studied in Northern Michigan and cheer them on over the next few weeks!

Pick Your Spot to Tune In to the Winter Games

Knot Just a Bar, Bay Harbor
A plenitude of TV’s, non-smoking policy in force, decent beer list and tasty food. A regular we know says she always loves the crab cakes and her husband loves the chicken nachos. A gigantic window overlooking the marina and a pool table help pass the time when the Olympian Yanks take a break. 820 Front, Bay Harbor, 231-439-2770.

Bay View Inn Bar and Grill, Acme
Like Cheers, but with a great view of East Grand Traverse Bay, this laid-back, welcoming place along the highway is a hangout for neighbors up the hill and anybody pulling in off U.S. 31. Decent number of TV’s, friendly staff. Our source: “Fabulous menu with great renditions of classic American food.” 5074 U.S. 31 N., 231-938-1610.

Mayfair Tavern, Elberta
Only two televisions, but the Mayfair is so intimate, that’s all you need. Outstanding beer selection that always has some good Michigan brew selections, including reliable selections of IPA’s on tap. Cozy, with awesome burgers and fries. Our source: “I love the Cuban sandwich.” 515 Frankfort Avenue, 231-352-9136.

Stucko’s, Marquette
You can see the Yooper Dome from this sports fan gathering spot on Marquette’s 3rd Street. About a dozen televisions keep the view of the games good too. Students know the place for the $4 Shoop—a 32-oz. glass of beer. The menu is gigantic and describes pretty much any kind of bar food an Olympics devotee might want. 900 North 3rd Street, 906-226-1112.