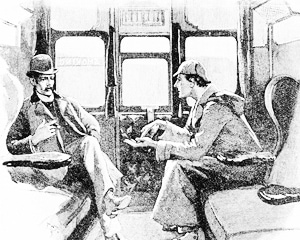 Old Town Playhouse is excited to present Sherlock Holmes: The Final Adventure by Stephen Dietz. The show opens Valentine’s Day week-end, on February 11th. It runs for three week-ends, with 11 performances, and closes February 27. Sherlock Holmes: The Final Adventure is based on the original 1899 play by William Gillette and Arthur Conan Doyle, this adaptation by Stephen Dietz was the winner of the 2007 Edgar Allan Poe Award for Best Mystery Play.

At the height of his powers, Sherlock Holmes is at his best, with danger, intrigue, wit, humor, and surprise. With his trusted companion Doctor Watson at his side, Holmes matches wits with his arch-nemesis, the evil Professor Moriarty, and faces his greatest challenge: a chilling mystery involving a kidnapped diva, the King of Bohemia, London’s seamy underworld, and the only woman to have captured Holmes’ elusive heart.

The director, Harriet Mittelberger, is a retired English and theatre arts teacher from the Washington, D.C. area. Her theatrical experience both on stage and backstage comprises over 30 years of experience.