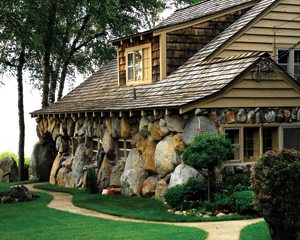 The year was 1913, and being young men and dreamers who believed anything was possible, two former Charlevoix High School graduates, by then in their early 20’s, set sail for a six-week odyssey that would take them from New York to the Panama Canal and back again. The canal was still under construction, and they hoped to see the progressing wonder for themselves.

One of the boys was Earl Young, who would later achieve his place in Charlevoix’s history by leaving his mark on the landscape with remarkable homes and buildings made of boulders, the most visible—The Weathervane Restaurant—hugs the channel by Charlevoix’s drawbridge. The other traveler was Peter “Don” Campbell, who pursued a career on the Great Lakes. He crewed on a variety of steam barges and finally captained his father’s mail boat, The Beaver, which ran between Charlevoix and Beaver Island in Lake Michigan. Later settling down to marry and raise a family, he established one of the two family-owned businesses in Charlevoix that survived into the 21st Century, Campbell’s (later Carey’s) Boot Shop.

Both of the young men had gone off to college for a time: Young to University of Michigan to study architecture, and Campbell to Michigan Agricultural College (which became Michigan State University), to study civil engineering. But in 1913, at that point in their lives when neither was committed to completing their degrees, not yet married, nor established in any permanent career, one can only assume that one suggested to the other, “How would you feel about seeing the world … setting out on the high seas … traveling while we have the chance?” Much as young people do today, with backpacks and Eurorail passes and a spirit of exuberance and adventure.

I was conjecturing about Young and Campbell in Julia “Anne” Bandfield’s dining room. Bandfield is the daughter of Don Campbell and a resident of Charlevoix’s north side who summers in a cottage (The Anchorage) built by her father that looks out over North Point in Lake Michigan. She is custodian of a potpourri of artifacts from early Charlevoix, has published her father’s observations of Charlevoix in a little book, A History of Bridge Street, and has collaborated with David Miles, co-director of the Harsha House Museum in Charlevoix, on several projects. Anne and I were paging through the scrapbook her father made of the Panama Canal excursion, which journaled the trip in captioned photographs. Bandfield, now 82 and always curious about her heritage, recently returned from a cruise to the canal that retraced many of the ports of call made by Young and Campbell in 1913.

“I would imagine that both boys learned much on that trip that fired up their imaginations and inspired their future career endeavors,” Anne said.

The Panama Canal, a project initiated in 1880 by the French, then abandoned when almost 22,000 workers fell victim to yellow fever and landslides, was taken up by the United States for completion in the early 1900’s. It was an engineering feat that became the model of lock systems of the future. In connecting the Caribbean to the Pacific Oceans, the canal cut off about 5,000 miles from the journey around Cape Horn. Today the Panama Canal services about 144 of the world’s trade routes, and will mark the 100th anniversary of its opening in 2014.

Young and Campbell wandered across the construction-zone landscape of the isthmus, taking note of the engineering skills involved in executing the project. According to an April 10, 1913, article in the Charlevoix Sentinel Newspaper that documented the boys’ journey, after touching at the east end of Cuba, and exploring the botanical gardens in Kingston, Jamaica …

“The next stop was at Colon at the entrance to the Panama Canal, where the boys spent two days viewing the wonders which Uncle Sam has worked in linking the two oceans. This period was the … (high point) of their itinerary, and they visited about every acre of the ground through which the great ditch passes. In the morning of the 23rd they took a carriage to Monkey Hill cemetery where it is said there lies a body for every tie laid on the Panama railroad by the French”

Upon their return, the boys went their separate ways. Young, inspired by the emerging architectural designs of Frank Lloyd Wright, and disillusioned by the adherence to traditional linear techniques promoted in his courses at the University of Michigan and the Victorian gingerbread styles he saw around him, chose to break away from the architectural norms of the day and create his own style. For a time, Young went into a partnership with his mother, Myrtle, who owned an insurance company. Several years later, together with his artist-wife Julia, he went on to design, execute the construction of, or remodel 29 homes around Charlevoix, while also hanging out his shingle as a realtor.

He never received a formal degree in architecture. His constructions are based on Frank Lloyd Wright’s theory of design, which uses natural materials, and respects and adheres to, rather than superimposes on, the landscape. When Young would find boulders in the area, he immediately filed away his treasure for future use. Often he had his crew unearth the monstrous rocks left behind when the glacier cut the Great Lakes, and then rebury them. He would memorize the dimensions and the color composition of his finds and catalog their properties; the boulders would eventually find a place in a chimney or hearth in one of his buildings. The boulder, wood and stucco homes and buildings of Earl Young—several houses in Boulder Park, The Weathervane Restaurant, The Weathervane Terrace Hotel, The Lodge Motel—have become landmarks in Charlevoix and remain monuments to the vision of a distinctive and imposing personality.

Did Young watch the engineering of the Panama Canal, the movement of earth and stone, the purposeful reordering of nature and apply the principles to his own constructions, especially when faced with the prospect of erecting his masterpiece along the channel in Charlevoix? We do not know for certain, but the notion is plausible.

Campbell Heads for the Freshwater Seas

Anne Bandfield can speak for her father to some extent, whereas Young’s four children have all passed away. Her father, Don Campbell, spent most of his life after the trip yearning to sail on the lakes. He had grown up son of a man who was part owner of a towing tug and later bought the mail boat, The Beaver. In his autobiography, written in 1949 when he was 60 years old, Campbell writes, “… I had the most love for boats of any of the boys in town as that seemed to be our natural heritage. Thru the years of our boyhood … we had boats: toy boats, rafts, scows, rowboats and finally a motorboat.” He and his friends were enamored by the barges and schooners coming in and out of the early Charlevoix harbor as the former swing bridge opened and closed to allow passage.

Campbell wanted to be part of the schooner scene; he would follow the lure of the sea when the opportunity arose, crewing on lumber barges, steamboats, passenger boats, and finally, his father’s mail boat. When he finally got land legs deciding to settle down and raise a family, he made his home on West Dixon Avenue, just down the street from what would become the Weathervane property on the channel looking out over Lake Michigan. Here is where his daughter Anne remembers her days growing up in Charlevoix in the late 1920’s and early 30’s. Anne and her sister could boat or swim at will in those carefree days and especially enjoyed watching the freighters and passenger boats jockeying into position to cross through the channel.

“I remember freighters being detained in the bend that was once in the channel, waiting for the wind to shift them into position to make the passage,” Anne said. “We could see the lights on board and hear their conversations in the night. The sailors would throw bones off the deck to our dog,” she remembers. Anne’s father became an integral part of the town he called home. He involved himself in community matters, establishing himself as a respected businessman in the shoe business.

At some time in 1919, Campbell bought the building that later became Campbell’s Boot Shop. Earl Young and his mother had maintained an office there but moved out and across the street when the Campbells moved in. It is from the vantage point of Campbell’s Boot Shop that Campbell played observer to several generations of businesses along Bridge Street from l9l9 until l967. In 1963 he began writing memoirs recalling the history of the economic community of Charlevoix. They were published as a series in the Charlevoix Courier beginning in 1967. When Anne came across her father’s memoirs and scrapbooks, she took it upon herself to work on publishing them into a book.

Both Young and Campbell left their mark on the small lakeside town of Charlevoix, each in his own way; Young with his legacy of architecture and Campbell with his memoirs, photographs and paintings of the area he loved. Their lives intersected briefly and became enriched by their education and travel. The “boys” left behind in their wakes, a slice of small town American history for us to appreciate and enjoy.