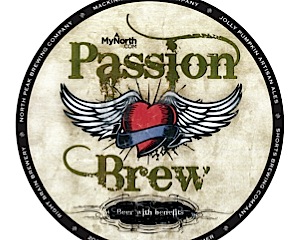 Valentine’s Day can be a fraught with social stress: Do you go out? With whom? Do you buy a present? How much do you spend? … What’s our simple solution? Find your friends and declare your love for Northern Michigan’s breweries by quaffing a draught of MyNorth Passion Brew. Four Northern Michigan breweries –Jolly Pumpkin, Right Brain, Short’s and North Peak–will be brewing a recipe for a Warm Winter Brown beer in limited quantities bearing the moniker, MyNorth Passion Brew. Proceeds from every passionate pint purchased will be donated to a local food bank. Beer with benefits!

Our September issue of Traverse, Northern Michigan’s Magazine featured Super Suds, with several stories on Northern Michigan microbreweries from Ludington to Traverse City and Bellaire. The popular response to the Super Suds issue inspired our editors to ask MyNorth.com readers, “What’s your favorite microbrewery?” in an online poll. With only bragging rights in the balance, the public reaction was vast and spirited. More than 2,000 people voted. (Read the wrap-up story on the microbrewery survey)

After the competitive dust settled, Russ Springsteen, owner of Right Brain Brewery in the warehouse district of Traverse City asked MyNorth, “Is there something we can do to show how Northern Michigan’s beer community works together?” MyNorth invited Russ over and set out to design a project where brewers could do just that. 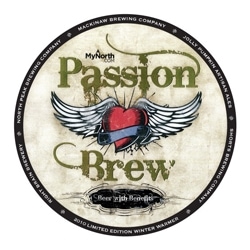 The project had to be something that would work in the individual locations of the various pubs. It had to be simple logistically. We wanted to be able to fit it in after the winter holidays. And of course it had to have a benefit for Northern Michigan. MyNorth Passion Brew, Beer with Benefits was born.

Russ carried the project to the breweries, organizing all the brewmasters around a single recipe and securing a hefty donation of malt from Mid Country Malt Supply Company. MyNorth embarked on promotion and merchandising assignments.

We expect that each brewmaster will have his or her own interpretation of the recipe and so we encourage you to visit all four Northern Michigan microbreweries to try all of them. Each brewery will launch MyNorth Passion Brew on tap on Friday, February 12th in time for the 2010 Valentine’s Day celebrations. The beer is a limited edition and we expect that it will be available for a couple weeks at least. But don’t wait to try it—the buzz is already building.