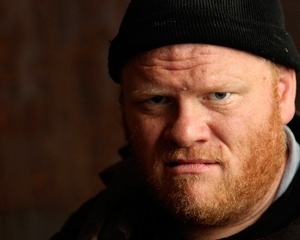 Expect to see one of the stars of the film, Fitful, at the film’s sneak preview at the Traverse City State Theatre on Wednesday, December 16 at 6:30 pm. Actor Larry Joe Campbell, will be coming in from Los Angeles to attend the event.

Fitful, a dark comedy/suspense feature written and directed by Michigan Film Maker of the Year, Rich Brauer, is Brauer Productions’s sixth film and the tenth film the company has been involved with overall.

In the film, Paula (Renee O’Connor) is an inspector for the Historic Trust who visits an abandoned ship on a desolate waterfront. She meets up with the self-appointed caretaker, Vigs (Larry Joe Campbell), who blindly made the application for historical status. Moments after her arrival, her car is disabled and she is far from town and is stuck for the night.

Without other options, she takes him up on his offer to spend the night. What follows is a sleepless night of bad dreams and creepy reality.

“This film represents a new genre for me as a filmmaker. It’s creepy in a good way and I can’t wait to have people enjoy it,” said Brauer. “We really want to share this with our friends and community first before it heads off for an L.A. premier in February.”

Larry Joe Campbell is best know for his role in the Emmy-nominated sitcom, “According to Jim,” where he played Andy, Jim Belushi’s affable sidekick. Campbell’s long career has Michigan roots. He is an alumnus of Central Michigan University and acted as an intern at the BoarsHead Theater in Lansing, Mich.

While Renee O’Connor has held numerous roles since she started her career directly out of high school, she gained a huge following as the beautiful and athletic Gabrielle on “Xena: Warrior Princess."

“Larry and Renee and the rest of the cast were the perfect fit, and it was a pleasure to bring them to Michigan. They both understood the story, and brought a lot to the table.  This is a film that Hollywood wouldn’t make, and that makes me happy.” said Brauer.

To purchase tickets in advance, go to traversecityfilmfest.org/statetheatre/. For more information about Brauer Productions, Inc. and other features it has produced, visit brauer.com.