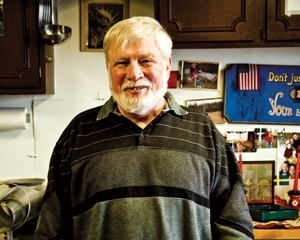 Hunters’ wives hear about him while getting their nails done downtown. Others find out about Brian Neff’s Old-World technique from their doctors. The hunters themselves just learn about him at camp, then follow their noses to the wood smoke billowing outside the sausage-maker’s modest home up the steep driveway second from the east on Atkins Road.

In-the-know Petoskey locals and people as far flung as Iron Mountain in the U.P. and New York trust Neff with the spoils of their hunt, which he coaxes into natural, old-fashioned sausages and then hands over fresh, or deep frozen to last through the long winter.

“We don’t mass-produce a lot of products,” Neff says. “But the hunter is getting only his own deer made exactly the way he likes it. If that means extra mustard seed, hot peppers, summer sausage with gouda cheese, that’s what I do.”

On this early winter morning, the Neff homestead’s Swedish flag is whipping high on the hill, and Brian is out tending to his smoker. “Modern smokers have timers and use liquid smoke, people can turn around, leave it and walk away,” Neff says, ashe closes the door of his relic, his breath vaporizing in the air. “Some even have casings that make it look smoked—it’s costefficient for them.”

But such shortcuts are not for Neff, who smokes only with the real thing, mostly maple wood chips. But if he’s smoking fish, he uses apple; ham, then hickory. “When I work my smoker I’m there. When I start making sausage, all this week, I’ll be there from 5 or 6 in the morning to 11 or 11:30 at night.”

Neff’s following has as much to do with his round-the-clock dedication as with his heritage. He was raised in Charlevoix, the son and nephew of two brothers who owned the lake town’s beloved, now bygone, Neff Quality Foods. The shop stood where the band shell is now on the downtown waterfront. The brothers built their business around summertime clubs andresorts and offered free delivery service.

If you’d like it made into sausage or are interested in Neff’s bulk pork Italian or breakfast sausage, potato sausage and brats, call Neff’s Gourmet Sausages, 231-347-6409.

Sausage Recipes for the Holidays

Click here for Betty Neff’s recipes for Sausage Stuffed With Jalapeños and Sausage Breakfast Casserole, both just right for a casual holiday gathering.