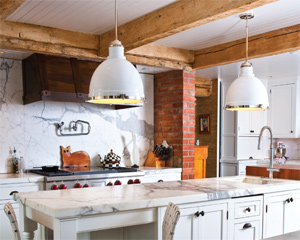 On the Obamas’ visit to Yellowstone National Park last August, they watched Old Faithful erupt, and they whitewater rafted the Gallatin River. When the First Family turned in for the night, it was to a penthouse suite at Big Sky Resort’s Summit Lodge—one of 12 resort properties scattered from coast to coast owned by Northern Michigan’s Boyne Resorts.

At Big Sky the Obamas were treated to the inimitable rustic-meets-elegant style of Kathryn Kircher, principal designer at the Boyne Design Group. In the case of the Obamas’ suite, that style translated into touches like Boyne’s signature luxurious beds (imagine a mattress designed for a princess’s sensibilities made up with lots of white fluffy bedding) paired with a handmade table burned in the center with a customized Old Weststyle brand.

The look comes naturally to Kathryn, who was raised in a hand-hewn, century-plus-old log and chink cabin that her father,Boyne founder Everett Kircher, moved from Tennessee to his favorite fly-fishing spot on the Boyne River, near the base of Boyne Mountain, in the early 1950’s. Kathryn’s childhood memories revolve around the cabin’s Northwoods setting—sledding with her two brothers and sister, fishing and duck hunting with her father (and one memorable après hunt breakfast over a bonfire) and, of course, skiing at Boyne Mountain.

But what was rustic and outdoorsy was anything but provincial. Kathryn grew up playing winter sports with the Midwest’s movers and shakers, and the European skiers her father recruited to teach at Boyne became close family friends—includingAustrian Olympic skier Othmar Schneider, longtime head of the Boyne Mountain ski school. “… he would practice with me—give me private [ski] lessons [when I was ] 2, carry my skis,” Kathryn says. Later, the Kircher family visited the Schneiders at their upscale Kristiania Lech Hotel in the Austrian Alps.

After Everett died in 2002, Kathryn purchased the family cabin from her mother, Lois, and began a renovation that hasspanned the births of her two children, Rhett, 4, and Piper, 3. During those years, with the help of Petoskey-based architect Jonathan Lee, Kathryn took the cabin from its dark, traditional, mid-century interior to an exciting, light-filled space that juxtaposes an eclectic mix of European and American antiques with contemporary design touches—but never loses sight of its identity as home to the first family of Michigan skiing. “The house has such great character it was easy to pull off amenagerie of styles,” Kathryn says.

The ancient southern pines that formed the cabin’s core structure were still strong when Kathryn took ownership, but the chopped up layout was outdated and the molding and windows a jumble of styles. The renovation included removing several walls to improve flow and extending the back of the home out several feet toward the river. By incorporatinga wall of windows in the living and dining room and bay windows in the kitchen and master bedroom, Lee created a more expansive view of Everett’s beloved Boyne River and Boyne Mountain.

And now it is very much Kathryn’s home. Her design narrative, a study in contradictions, threads through the home, sometimes upscale and serious, others whimsical and as down-home as the cabin itself. Working with designer Jennifer Page from the Kitchen and Co. in Petoskey, Kathryn replaced the kitchen’s dark oak cabinets with traditional milky white cabinetry topped in marble—to evoke the feeling of an “old European fudge shop,” Kathryn says. The kitchen floor is reclaimed from a French chateau, stained dark and waxed. The effect is at once satiny and gnarled: vintage Kathryn Kircher.

Black and white stripes on the kitchen walls are a whimsical foil to the hand-hewn ceiling beams. A set of carved and peeling European doors that lead from the kitchen to the master bedroom suite looks fairytale.

“She was really fun to work with,” says Page, who, at Kathryn’s request, found antique icebox hinges to add to the refrigerator panels so it would look old.

And so it goes, in a home where crystal chandeliers hang from hand-hewn beams, leopard-print carpet climbs the staircase, zebra print and magenta pillows wake up the breakfast nook and French toile wallpaper makes a stunning appearance in a bedroom of this old Tennessee cabin.

“The family joke is that the only thing I left were the timbers,” Kathryn says with a laugh.

That is only partially correct. She left the red brick wall and hearth between the kitchen and the dining room that her father had built when he added a new wing to the home decades ago. And there’s that E pluribus unum eagle wallpaper in her brother Steve’s old bedroom, now Rhett’s room, that she left as a favor to Steve, who couldn’t bear to see it come down. And certainly those old ceiling timbers haven’t changed. The master bed still fits snuggly between two of them in exactly the same place it did when it was her parents’ bedroom. Kathryn wouldn’t have it any other way.