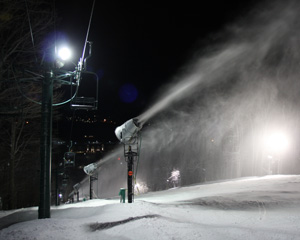 Some people call him “The Snow Man,” but his real name is Ed Grice. He’s the man who decides how many snow guns should be placed on the slopes, how many runs to open, and how many people to hire to make Boyne Mountain a destination ski resort each winter. MyNorth talked with Grice, general manager of Boyne Mountain, as he sat in his spacious office overlooking the mountain while snow guns whirred and roared, and workers prepared the slopes for skiers this weekend. Boyne Mountain is scheduled to open for the season this Friday, December 11, 2009.

MyNorth: This is a beautiful office with a great view of the mountain and the snowmaking equipment.

Ed Grice: This was Everett Kircher’s (the president and founder of Boyne Mountain who died in 2002) office before the new administration office was built in the 70’s. You can see why he chose it. It has the most spectacular view. You can see just about everything going on at the resort.

MyNorth: How do you decide how many snow guns to put out and where to put them?

Ed Grice: Our goal is always to have the guns in place and ready the middle of October. That doesn’t mean we’ll start making snow then, but we’re ready. This year we were ready, but Mother Nature wasn’t ready. And we didn’t start making snow until Thursday of last week. Unfortunately, we missed our Thanksgiving holiday. But we should be in pretty good shape and able to open this Friday.

MyNorth: How many snow guns are on the resort property?

Ed Grice: We have a total of 500. We have 65 or 70 running right now. Many are pole-mounted and in their permanent locations. Other ones are on wheels or skis and dragged to different locations. We try to address snowmaking on the slopes that are most popular—Victor, Hemlock, Aurora, and McLouth—and on giving the better skiers places to go. And we can’t forget about the kids and the intermediate skiers: we do Boyne Land and Deer Run and Cold Springs. There’s something for everybody. It’s a family resort.

MyNorth: Tell me more about the snow guns.

Ed Grice: Those are the Boyne Low-E snow guns. They will make several times the snow as a traditional fan gun would. What you have in that gun is an inch and a half hose that supplies water at 400 pounds to the gun. You have another hose, a one-inch hose, that supplies 80 pounds of air, and then you have an electrical line that supplies electricity. It goes in that front manifold, mixes it all up, and shoots it up in the air. The colder it is, the faster it freezes and drops to the ground. One of the great things about that particular gun is that you can adjust it very easily as the weather changes and warms up.

Ed Grice: A lot of it happened here with Everett Kircher and at Boyne Highlands. Kircher held a patent on the Highlander gun, which is really the gun that all fan guns are based on. Our team at Boyne Highlands designed and developed this Low-E gun. These Boyne Low-E Guns are used at every Boyne resort in the Boyne network across the country.

MyNorth: How many runs in all here at Boyne Mountain?

MyNorth: How many people come up here to ski each year?

MyNorth: So much of Boyne Mountain’s survival is dependent on snow. Who do you depend on for snow predictions?

Ed Grice: You’re right. Without the white stuff nothing really matters. We do have a waterpark and seven different restaurants and a lot of wonderful activities. But the core of our business is snow sports. We never forget that. We make heavy investments in snowmaking as an insurance policy to make sure we can get in business in marginal years. This year is an example of it. The weather has not been so favorable for snowmaking, but as soon as we can, we get on it and we hit it hard. We can get open in just a few days. Without snow, nothing else matters. It doesn’t matter if you have the best restaurant or the best ski instructors. It all starts certainly with the snow.

MyNorth: But who or what do you depend on for snow predictions?

Ed Grice: We subscribe to several weather forecasts. We certainly listen to local TV forecasts. We use everything. We go to the weather channel. I’m an optimist. I always believe the one that’s the most favorable for snowmaking! You’ll find a particular forecaster’s model works. We focus on what they have to say for a few days, until they’ve proven themselves wrong. Then you go to a different model.

Ed Grice: I don’t use it. But a lot of times, in retrospect, it’s proven true.

MyNorth: Any rituals to bring on snow?

Ed Grice: We’ve had people do snow dances, especially after a few hours in the bar, in the Snowflake Lounge.

More on Hitting the Slopes in Northern Michigan