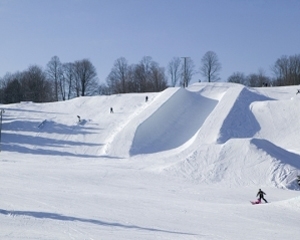 Serving as the North American training grounds for several National Olympic snowboarding teams this winter, the Otsego Club and Resort of Gaylord, Michigan is getting ready to welcome some of the world’s most talented athletes as they prepare for the upcoming 2010 Winter Olympics in Vancouver, Canada.

The Otsego Club is opening its doors to the public December 19-20 with $10 lift tickets.  Special events, demos, and much more will be happening this weekend.

For the last two weeks, the Otsego Club has been taking advantage of the falling snow and freezing temperatures required to make and accumulate enough snow to form one of only a handful of Olympic-sized half pipes in the country.

“Making enough snow to form and shape the 22-foot monster pipe takes a lot of work,” said Kris Klay, Otsego Club general manager.  “You’re looking at building up roughly 4 million cubic feet of snow before you can even touch it with any shaping equipment.”

Klay continued to explain that while the creation of the monster pipe was a huge undertaking, the Otsego Club terrain park crew was both experienced and well equipped to handle the job.  In fact, while the snow guns were blazing away at the site of the halfpipe, the terrain park crew was in the near-by maintenance shop making adjustments on the new 22’ Zaugg Pipe Monster that had recently arrived.

With what looked like a giant sized crop sickle with auger blades lining the inside of it, the oversized snow blower was exactly the tool they needed in order to cut a halfpipe to Olympic specifications.

“The pipe monster is a highly coveted piece of equipment no matter where you go,” said Planet Snow Designs terrain guru Ryan Neptune.  “World class events like the X Games have been using this tool since 2003, and it’s exactly what we need to create a halfpipe that the Olympic snowboarders will appreciate.”

Already confirmed to stop by and train at the Otsego Club include athletes representing the United States, Japan, Australia, New Zealand, Germany, Switzerland, and Italy. The snowboarders will begin arriving during the first week of January and train up until they depart in February for Vancouver.

Along with being open every day during the Olympic training sessions, the Otsego Club is offering a variety of special memberships and packages throughout the winter season. This is a perfect opportunity to get up close and experience the feeling of skiing and riding along side an elite group of international athletes as they prepare to make history.

To find out more on the Otsego Club and their special promotional offers, call (800) 752-5510 or visit otsegoclub.com.

More on Hitting the Slopes