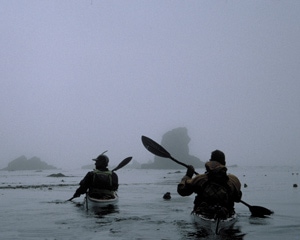 The low-impact nature of kayaking makes it one of the few sports that people can pursue throughout their lives. But few kayakers of retirement age could match the paddling résumé of Michigan resident Stan Chladek, who will bring his stories of a life spent on the water to Traverse City’s InsideOut Gallery this Monday, November 9.

In a talk and slideshow irreverently titled, "On the World’s Oceans with a Kayak, or, Why I Could Not Be Employed," the paddling legend will introduce audiences to the unforgiving seas, rugged coasts, and marine wildlife that have been the setting to his decades-long career in the sport.

Chladek’s adventures have taken him to waters in North America, Europe, Australia and Antarctica, but it was his 1999 circumnavigation of Easter Island with fellow paddler Nigel Dennis, a first for sea-kayakers, that solidified his status in the paddling world.

After Chladek and his wife, Ema, won a mixed-team paddling title at the Whitewater World Championships in Austria, the couple opened Great River Outfitters sea kayak company in the metro Detroit area in 1972. Now in his 70’s, Stan is officially retired from the retail business. A retirement from the sport, however, still appears to be a ways off.

Chladek’s talk and slideshow start at 7 p.m. There is no fee for the event, but reservations are required. To reserve a spot, call Backcountry Outfitters at 231-946-1339.

More on Paddling in Northern Michigan