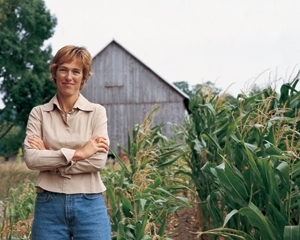 On an afternoon in mid-July, Patty Cantrell is sharing her message in a setting that seems very far from the farms she thinks of and advocates for every day. Today she steps to a podium at a country club luncheon, and before her sit 250 members of the Economic Club of Traverse City. They are businesspeople—automotive executives, pharmaceutical salespeople, real estate developers, bankers, stockbrokers and lawyers. The men and women are dressed in suits, are mostly middle-aged and older. Probably only a few of them have ever stooped under an afternoon sun in a green-bean field, milked a cow or wrangled a pig back into a pen.

Tuxedoed waiters and waitresses gather dinner plates and serve raspberry sherbet as Cantrell begins her talk. And there seems to be a palpable skepticism in the air. The businesspeople know they are going to hear a small-farm advocate, so perhaps they are girding against yet another woeful tale of American farming. Perhaps they are expecting a plea for more government farm subsidies. Some club members may have seen criticism in the newspaper by opponents of the organization Cantrell works for, the Michigan Land Use Institute. A few people have called MLUI socialist or communist for some of its anti-sprawl policy positions.

But as Cantrell moves through her speech, the audience hears something entirely unexpected. Cantrell talks about letting small, local farmers compete on a level playing field against large agribusiness companies. She says small farms should be freed from regulations designed for farms much larger. She says we must reap the benefits of our farmers’ creativity and entrepreneurial spirit.

And she points out what’s in it for the audience. Allowing small farms to compete fairly is the best way to preserve our countryside because profitable farms are less vulnerable to development—and this solution requires no tax money. Local food is better for our families because it provides more nutrition and tastes better. And local food is better for our energy security and food security because it’s shipped shorter distances and consumes less fuel. The message is an unvarnished pitch for the free market, a speech that would make Ronald Reagan and Milton Friedman proud. By the end of the talk, Cantrell holds the crowds’ complete attention, and as she concludes, they burst into genuine applause.

The dining room empties as Cantrell packs up the brochures she set out on a table—the Taste the Local Difference directory, a list of farms that sell directly to the public. “We printed 25,000 of these this year and it’s not going to be enough,” she says.

“In the previous year’s directory, half the farmers listed reported having new customers because of the brochure.” She carries the box down the mahogany-trimmed hallways of the club and into the outdoors, where the glossy golf course fairways glow green under the blue sky.

Speaking at an economic club might be out of the ordinary for Cantrell, but encouraging people to buy locally grown foods is essentially what she has done for a living since she launched the Entrepreneurial Agriculture Project three years ago. Think of the project as an independent marketing group devoted to local farms. Cantrell and her associate, award-winning journalist Diane Conners, write stories about entrepreneurial farmers, run promotional retail campaigns for locally grown food, and help connect farmers to commercial customers, like restaurants and schools. The project is barely out of its infancy, but already Michigan’s agriculture community is crediting the project’s work with helping divert food dollars into the hands of small farmers and giving momentum to the local foods movement, one of the most intriguing trends to hit American agriculture in decades.

Thinking of her work, Cantrell says, “So much of environmentalism has to do with stopping something bad, but I wanted to be involved with starting something good.” The simple statement says much about the pragmatic Missouri farm girl who has merged a background in reporting, an education in economics and business and a passion for the agricultural life. And her work comes none too soon. Thirty-five percent of Northwestern Lower Michigan’s medium-sized farms—those with gross income between $50,000 and $500,000 a year—disappeared between 1997 and 2002.

Though Cantrell has become one of Michigan’s strongest advocates for locally grown foods, she herself has something of an international background. She was born in Germany, after her father fell in love and married a German woman while he was stationed there in the service. Her parents eventually divorced, so in high school she spent school months in the United States and summers in Germany. Until she was in middle school, her family was somewhat on the move—they lived in the Colorado mountains for a spell, then in a Denver suburb. But then they moved back to her father’s homeland, Marshfield, Missouri, about a half-hour from Springfield, and that was a turning point for Cantrell.

Her father had 11 brothers and sisters, and much of his extended family lived in the area, where many had dairy farms. “All of a sudden I was related to so many people,” Cantrell says. “I was Duke Cantrell’s daughter. I had a hometown.”

Her dad bought a 40-acre farm, and Cantrell bottle-fed calves, put up hay, rode fence lines on a dirt bike and heard talk of farm economics when her family gathered. Her dad also bought his family’s mechanics garage, Cantrell Brothers Garage. Cantrell would go there after school and wait for her dad. She listened as friends and family stopped by for their cars and tractors and to share their views. At closing time, father and daughter would ride home together. “Looking back on it, I learned so much about the value of small businesses and community connections there,” she says.

When she lived with her mother in Germany, and later, on a Fulbright Scholarship to Germany after she graduated, Cantrell’s thoughts on connections between farms and community were reinforced. She saw that daily fresh food was part of the culture, and the relationship between land and food was visible. “The city ended, the farms began,” she says.

Cantrell studied economics and politics in college and then landed a job at the Rocky Mountain Institute, one of America’s most esteemed environmental-policy think tanks. From 1992 to 1994 she took a business-reporting job at the Springfield News Leader while working on an MBA. “I was concerned that I would be dismissed as an idealistic kid,” she says. “I wanted to learn the language of business and communicate in that way.”

Step into the produce section at Oleson’s grocery store on North Long Lake Road, in Traverse City, and evidence of Cantrell’s work is easy to spy. From the ceiling hangs a 3-by-4-foot poster with brilliant red tomatoes and peppers that says “Taste the Local Difference”—a slogan that she and colleagues created. Reinforcing the message are smaller paper signs taped to rims of produce bins here and there throughout the department: “Taste the Local Difference” with white space for farmers to write more information. At a stack of Leelanau Cheese packages, local cheese maker Anne Hoyt wrote “Artisanal handcrafted and award-winning cheese made with local cow’s milk.” Written in black marker, in Hoyt’s own hand, the message takes the shopper a step closer to the farmer.

Grocers are finding that shoppers value knowing the story of the farmer, so Cantrell has worked to push that story down to the retail level. “Retailers, along with farmers, are needing to differentiate themselves, and selling food from local farms helps them do that,” she says.

Of course, much of Cantrell’s local foods work isn’t starting something new so much as it’s breathing life into traditional ways of doing business that had been nearly suffocated by central distribution systems. “All the years we’ve been in business, local farmers have been an important to us,” says Brad Oleson as he stands near the tomato bin. Oleson doesn’t need a brochure to explain the symbiotic nature of local economy. “The same people I’m buying produce from are the same people shopping in my store.” He’s a grandson of Oleson’s founder and reveals evidence of the patriarch’s hands-on ethic. With a cell phone ringing at his belt, sunglasses perched on his head, it’s clear Brad has places to go. In the morning darkness, he still hauls a good deal of local produce himself to ensure its freshness. During harvest time, local farms provide up to 20 percent of his produce. “Since Patty has been around, we’re seeing renewed interest in local markets and local farming. She’s educating people about what is available, made it easier to go out and pick stuff yourself. That saying they use, ‘Thousands of miles fresher,’ I’ve always liked that,” Oleson says.

These days, Patty Cantrell is not a farmer. She spends her time standing at easels in meetings. She talks on the phone. She types at the computer. She drives her car. She reads about agricultural economics. But she never forgets that her work is all about farms like Halpin Highlands Farm, run by Pennie and Chris Halpin, just north of Kaleva. Pull up to the Halpin place, and you suddenly realize you haven’t seen a farm like this in a long time, even though it’s what you think of as a farm. A dozen cattle graze in the field, 90 goats mill about in various pens, a couple thousand chickens scratch the dirt and cluck. Pigs lie in the mud. Piglets escape the pen and run through the field. And a multitude of various crops grow in the field—green beans, squash, roma tomatoes, basil, sunflowers.

A sunny September afternoon finds Pennie assembling wicker baskets of vegetables for the farm’s subscription customers—people who pay a lump sum in spring and then receive a weekly basket of produce all season long. Their produce is pesticide-free and their animals are pasture raised, and free of antibiotics and hormone additives.

“Many of the people Patty is helping are small, insignificant farms—that’s how we saw ourselves,” Pennie says. “But where people have struggled for years, Patty has put a spotlight on them and allowed them to get some substantial income.”

Pennie grew up on a farm near the new Traverse City high school, and her dad tried hard to talk Pennie and Chris out of the farming life. “There’s no money in it,” he said. And now he’s surrounded by development. “People try to shoo him off the road because his tractor is going too slow,” says Penny. “Kids from the track team run through his fields. And all he wants to do is farm in peace.”

That’s what people need to understand, Pennie says. “It’s a two-way street. If they want to look at beautiful farms, they need to consume what we grow.” And Cantrell’s work has given the Halpins more hope that that two-way street will work. “Patty is plugging herself in in all the right spots. She’s weaving it all together,” Pennie says. “And she’s just in time.”

Jeff Smith is editor of TRAVERSE. smith@traversemagazine.com. This article ran in the November 2005 edition of TRAVERSE.

Entrepreneurial Agriculture on the Web

Learn where to buy locally grown foods and meet the spirited farmers who are making good things happen at the Taste the Local Difference Web site.

Taste the Local Difference directoryQuick access to farm markets and more than 150 farms in eight Northwest Michigan counties. Order a copy by mail or just download one on the spot.

The New Entrepreneurial AgricultureThe first comprehensive report that Patty Cantrell wrote on entrepreneurial agriculture gives a fine overview of why the trend is important to Michigan and provides inspiring profiles of farmers.

New Farm GazetteEngaging stories that detail the many ways farmers are giving momentum to the local foods movement. Most are written by award-winning journalist Diane Conners, now on staff at the Entrepreneurial Agriculture Project.

Quick Links to Fun in the Traverse City region