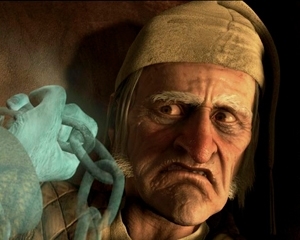 Catch a movie over the holiday weekend in Traverse City! Be sure and call to confirm movie times.

An unhappily married couple receive a small wooden box on their doorstep. At the push of a button, the box brings its bearer instant wealth but also instantly kills someone the bearer doesn’t know. PG-13, 116 minutes4:29 pm, 9:45 pm

3DEbenezer Scrooge begins the Christmas holiday with his usual miserly contempt, barking at his faithful clerk and his cheery nephew. But when the ghosts of Christmas Past, Present and Yet to Come take him on an eye-opening journey revealing truths Old Scrooge is reluctant to face, he must open his heart to undo years of ill will before it’s too late.
PG, 96 minutes12:30 pm, 2:50 pm, 5:10 pm, 7:30 pm, 9:50 pm

(starts Friday, November 27, 2009). Mr and Mrs Fox live an idyllic home life with their son Ash and visiting young nephew Kristopherson. But after 12 years, the bucolic existence proves too much for Mr Fox’s wild animal instincts. Soon he slips back into his old ways as a sneaky chicken thief and in doing so, endangers not only his beloved family, but the whole animal community. PG, 87 minutes

Michael Jackson’s This Is It

A rare glimpse into the final days of Michael Jackson, the documentary is compiled from an estimated 80 hours of rehearsal and behind-the-scenes footage of the legendary entertainer preparing for his 50 sold-out shows at London’s O2 Arena.PG, 121 minutes1:15 pm, 7:10 pm

An alien planet, stuck in the culture of the 1950’s, finds it barely-repressed paranoia kick-started into high gear when Chuck, a NASA astronaut, arrives without warning and turns their world upside down. PG, 131 minutes1:35 pm, 4:35 pm, 7:05 pm, 9:30 pm

Four Midwestern couples embark on a journey to a tropical island resort. While one of the couples is there to work on their marriage, the other three set out to jet ski, spa and enjoy some fun in the sun. They soon discover that participation in the resort’s couples therapy is not optional. PG-13, 107 minutes1:20 pm, 4:05 pm, 7:05 pm, 9:30 pm

Clyde Shelton is an upstanding family man whose wife and daughter are brutally murdered during a home invasion. When the killers are caught, Nick Rice, a hotshot young Philadelphia prosecutor, is assigned to the case.R, 108 minutes1:00 pm, 4:00 pm, 7:00 pm, 9:45 pm

The Men Who Stare at Goats

Raizo is one of the deadliest assassins in the world. Taken from the streets as a child, he was transformed into a trained killer by the Ozunu Clan, a secret society whose very existence is considered a myth.R, 99 minutes1:25 pm, 3:30 pm, 7:15 pm, 9:45 pm

After a young, middle class couple moves into what seems like a typical suburban "starter" tract house, they become increasingly disturbed by a presence that may or may not be demonic, but is certainly most active in the middle of the night.R, 99 minutes1:10 pm, 3:20 pm, 5:30 pm, 7:40 pm, 9:50 pm

In the 1960s a group of 8 rogue DJs on a boat in the middle of the Northern Atlantic, played rock records and broke the law all for the love of music. The songs they played united and defined an entire generation and drove the British government crazy.R, 129 minutes12:45 pm, 4:00 pm, 7:00 pm, 10:00 pm

A coming-of-age story about a teenage girl in 1960s suburban London, and how her life changes with the arrival of a playboy nearly twice her age.PG-13, 95 minutes7:30 pm

After inadvertently wreaking havoc on the elf community due to his ungainly size, a man raised as an elf at the North Pole is sent to the U.S. in search of his true identity.PG, 97 minutes10:00 a.m

Check out the movies in other Northern Michigan regions