Made in Michigan Gifts: Handmade Harps 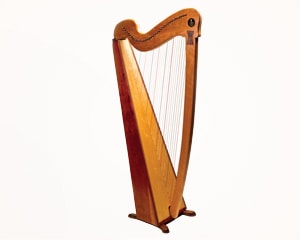 Jerry Wares never imagined he would build beautiful harps in in Traverse City. He has been a fine woodworker hobbyist since he built his mother a beautifully crafted cedar chest many decades ago in a high school shop class. But seven years ago, his hobby took a more serious turn when his wife, Marilyn, was diagnosed with cancer.

Jerry bought Marilyn a harp after she took a class called Harps of Hope, started by Traverse City nurse practitioner Sharon Olson, that uses the instrument to help soothe people facing life-threatening illnesses. Marilyn’s harp playing was lovely, but Jerry thought he could build her a better instrument. After studying harp building in books, on the Internet and by talking to other harp builders, Jerry, who is also a cancer survivor, mastered the skill of harp building. He’s been building harps ever since, many of which are used at Munson Medical Center, Munson Hospice and Harps of Hope.

Jerry’s reputation is spreading throughout the country, for good reason. His harps are gorgeous—all handmade from beautifully polished, hand-selected exotic woods—and outfitted with custom strings and precisely turned sounding boards, they sound heavenly. Pictured is his Sharon Harp, $1,695. 231-223-4895.

More Products Made in Northern Michigan