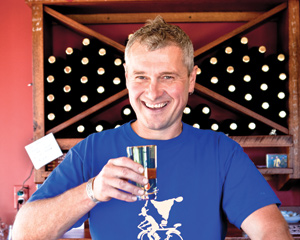 Back in Greenfield, Massachusetts, Dan Young was a brewer and restaurant owner, but when he joined wife and plant biologist Nikki Rothwell in their new life on the Leelanau Peninsula—she’s the director of the Northwest Michigan Horticultural Research Station in Leelanau County—Young knew he didn’t want to pick up brewing where he left off. He didn’t see the point of continually importing the ingredients needed to make beer, so it was just his good fortune that he was in the heart of fruit country.

With several area farmers’ fresh apples at the ready, he and Rothwell opened Tandem Ciders and began crafting artisan hard ciders in a sweet white barn on Setterbo Road last fall. Now with an ’09 harvest of Northern Spy, MacIntosh, Ida Red and other Michigan-grown apples (and with plans to plant a few European varieties cultivated specifically for cider-making) they’ve got the taps flowing with six deliciously refreshing ciders that can be mixed and matched into custom blends to suit any palate.

For those folks who come in from the Leelanau wine trail uninitiated to the world of cider, Young pulls a friendly, fresh swallow of cider and slips them a line by Frank Browning, from his tome Apples:

“I had supposed, like most first-time cider sippers, that cider would be simply another sort of wine, which it is not … cider requires its own neural pathway into gastronomic memory. It must be taken altogether on its own terms …”

Indeed, a cidery is a refreshing addition to the wine trail, and come late afternoon, you can join fans of the fermented forbidden fruit sitting on stools at the bar, ordering a pint to consume right there on site. Order some local raclette cheese and pepper jelly made down the road to go with it, or a couple of pickled eggs made from Young’s old Uncle Art’s recipe.

As for the ciders, we’re fans of IdaGold, which still has a delightful touch of tartness though it has been sweetened after fermentation with neighbor Julius Kolarik’s honey, and Scrumpy Little Woody, which has spent just the right amount of time in an oak barrel.

The hard cider is available on tap, in bottles and growlers. Take home a blend for your Thanksgiving dinner table, (it was, after all, the colonial quencher of choice). Young loves A Walk in the Orchard: Pam’s Potion, IdaGold and Winesmack pulled equally from the tap.