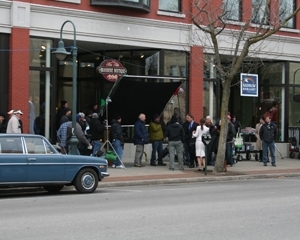 A crowd gathered to watch on Sunday as Josh Lucas, star of such films as Sweet Home Alabama and Glory Road filmed his first scenes on Traverse City’s Front Street for the upcoming film A Year in Mooring. The film tells the story of a successful businessman struck by tragedy, who escapes his grief by moving aboard a sailing vessel in a secluded waterfront town. The local Maritime Heritage Association’s Champion, a 39-foot cutter, will feature prominently in the film, as will high-profile regional locales like the Bowers Harbor Yacht Club.

Producers were drawn to the area for its natural beauty and numerous waterfront locations, as well as Michigan’s 40 percent tax rebate on films produced in-state—the highest incentive of its kind in the nation. Films shot in cities designated as "core communities," such as Traverse City, receive an additional 2 percent tax credit. Since the introduction of the film tax incentive in April 2008, the number of films produced in Michigan soared from two in 2007 to 35 in 2008, according to the Michigan Film Office. A Year in Mooring is the latest in a crop of more than 85 movies made, or slated to be made, in Michigan in 2009.

At least 75 locals were hired as extras for the film, with dozens more filling key roles in production and crew. Local filmmaker Rich Brauer, who has long served as a resource and consultant for film and television productions, is the film’s set coordinator. Cast and crew will reside in Traverse City throughout the shoot, lending a significant economic boost to downtown and the Grand Traverse region.