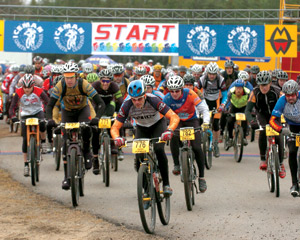 If you haven’t entered already, don’t even try to muster the uniquely Up North bravado (read: craziness) it takes to ride the Iceman Cometh Challenge on November 7. Race director Steve Brown cut off registration for the 27-mile Kalkaska to Traverse City mountain bike race late last summer after it peaked at a recordbreaking 4,000 riders.

That’s one hellacious ride for a race that started in 1989 with 35 bikers—and no food or drink stations. Brown credits the fickleness of Northern Michigan Novembers for the race’s success.

“Ultimately it’s the unknown factor of what weather is going to do—pitting yourself against the elements,” he says. One historic favorite? The 2003 Iceman, when an early-season snowstorm wreaked havoc on the trail. “Everybody crashed five or six times, and they all still say it was the most memorable race,” Brown says.

The 27-mile, point-to-point race has been held in rain, sleet, mud and of course snow. Many years the Iceman has been held in very snowy (sometimes up to five inches) and cold (19 degrees) conditions. Hands, toes, and water bottles have been known to freeze. These days the most competitive riders brave the elements for just under $25,000 in cash prizes and $10,000 in merchandise prizes, while others hope just to better their time, win their age class and have a blast.

In addition, the Iceman now uses ChronoTrack’s D-Tags, small tags already attached to each rider’s number plate, which eliminate the need for several check points, allowing readers to concentrate on their time and times to be more accurate.

If you’re not riding in the race, come out to cheer the cyclists on. The Iceman starts in Kalkaska at 9:30 a.m. and finishes at Timber Ridge Resort. iceman.com.