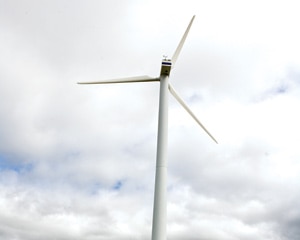 It’s three o’clock on a Thursday afternoon in early September, and Karen Roberts knows her decision time has arrived. She’s sitting in her home office putting finishing touches on a draft ordinance that lays out rules for commercial wind turbines in Benzie County, and she must have the draft submitted to the planning commission by midnight.

The biggest decision she faces, the one she has grappled with most, is about noise. She has to pick a decibel number that sets a limit on how loud commercial scale wind turbines can be in this quiet rural county. She wants a number that protects the public, but is also welcoming to wind developers, an industry that can bring much-desired non-polluting, sustainable-energy jobs.

“Honestly, some time before I go to bed tonight I’m going to decide something,” she says.

On the same afternoon, 30 miles to the northeast in neighboring Leelanau County, Tim Johnson, chair of the Centerville Township planning commission, is expecting T.J. Ewing, chair of adjacent Cleveland Township’s planning commission, to stop by. They might sit on Johnson’s porch, set amid Leelanau County’s rolling, orchard-rowed, tourist-attracting countryside, to review the wind ordinance that Centerville has drafted over the course of three years.

Ewing told Johnson he’s looking for insight as his commission also moves down the path of writing a wind turbine ordinance. It’s hard to know what the mind-share might mean for commercial wind in Leelanau County: Centerville’s draft ordinance is so stringent that, if finalized, it would effectively zone utility-scale wind development right out of the township.

Meanwhile, in the cornfield-squared countryside between Cadillac and McBain, a construction crew is busy raising the third turbine of what will soon be a nine-turbine wind farm. With footings already poured, managers intend to have one new turbine erected every eight days until this phase is complete. Eventually the wind farm might host 30 to 50 windmills. The turbines are giant, stateof-the-art machines, some with blades that reach 475 feet at the top of their sweep and, with their 300-foot rotor diameter, churn an area 22 percent larger than a football field. The township, Richland, and county, Missaukee, have no zoning, so there are no local rules for wind turbines.

“The local land owners are the local zoning per se,” because they negotiate what they want with the wind company, says Rick Wilson, a vice president with Heritage Sustainable Energy, which is developing the McBain project, called Stoney Corners.

Wind power on a grand scale is not new to America, but it is novel to Michigan, which as recently as 2007 had just three commercial wind turbines (by comparison, Texas had about 3,000). Today Michigan has about 60 commercial wind turbines, but wind experts say that within six years the number could rise to 1,000 statewide and possibly more if power companies are to meet the mandate of a state law passed in December 2008 that requires them to produce at least 10 percent of their energy from renewable sources by 2015.