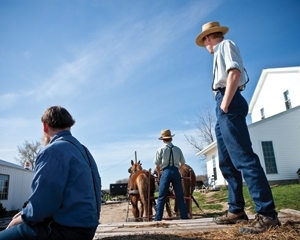 The most tenuous arrived in 2004. The church they belonged to in Ovid was breaking up over issues related to the control of the church and differing views of the direction it should take. “It was quite a let down. But we learned the Amish are a people like any other people, with the same issues,” Bill says.

People from Ovid went in different directions, joined different types of churches. “We wondered if we should go back to what we were doing before, or join a more progressive church, like a Mennonite church, and get an automobile again.” But instead, they moved to Cadillac to join a more established Amish community there.

Recently, another time of questioning arose. Good friends who lived in a nearby Amish community, and who were also Seekers, decided to leave the Amish and joined a Mennonite church in Kentucky. What made their move troubling for the Mosers is that this family’s story of leaving mainstream America and their reasons for becoming Amish was a touchstone in the Mosers’ own decision, because their reasons were so similar.

The greatest challenge Seekers face tends not to be longing for artifacts from their former life, like, say, a car or a computer. The biggest challenge is Seekers may feel like ex-patriots from the United States living in an Amish nation; they don’t share decades of life story and customs with the people they live among.

And above all, Seekers struggle with the language, a German dialect called Pennsylvania Dutch. Language is of course important in assimilating to any foreign culture, but for Seekers the issue goes far beyond learning how to say, “Where is the bathroom?” The Seekers’ new religion is often discussed in the new language, and language becomes a barrier to what the Seekers most seek: a nuanced and in-depth understanding of the Amish faith and continued growth in their spirituality.

The Mosers’ friends left the Amish for a Mennonite church that offered a sermon in English every week. The Mosers’ church offers sermons in English every other week and translators for people who need them during the German services. Bill and Tricia have worked hard to learn the tongue. Originally they had hoped to speak fluently. But now, Tricia hopes only that one day she’ll be able to understand what’s being said.

“I don’t know that we’ll ever reach a point where we feel totally immersed in the culture,” Bill concedes. “But our children already do. They grew up with the language and completely understand it.