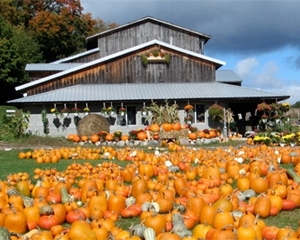 Think that picking out a pumpkin is just about choosing between a tall pumpkin or a squat pumpkin? Think again. Pond Hill Farm in Harbor Springs runs through some pumpkin tips and talks about some of the many varieties of pumpkins they grow. Here are just a few:

These bear quite a resemblance to that fabled carriage that had to get home by midnight. The Cinderella is actually a French heirloom whose name is actually “Rouge vif D’Etampes.” Records indicate that the Cinderella was the pumpkin grown by Pilgrims and was a part of the second Thanksgiving dinner. Carve them, use them to decorate and use the meat in any pie or winter squash recipe.

This variety has the straightforward look of a traditional pumpkin. It is hard shelled and you’ll find it early in the season. You can identify a gargoyle by its distinctive occasional warts and large handle.

This pumpkin is perfect for creating a particularly creepy display because it isn’t orange…it’s blue. Actually, these Australian heirloom pumpkins are gorgeous, with deeply ribbed drum shapes and a silvery bluish-grey color. They look particularly beautiful in autumn moonlight. But beyond using the Jarrahdale for decorating, the nutty, sweet flavor of their stringless flesh makes them wonderful for cooking. One great suggestion? Carve out a Jarrahdale and fill it with a holiday soup or stew.

Giant pumpkins are growing…literally. The world record for these giant beauties was just set last week at an Ohio weigh off with one pumpkin weighing in at 1,725 pounds. Christy Harp, of Jackson Township, took first place at the Ohio Valley Giant Pumpkin Growers’ annual weigh-off on Saturday in Canfield. According to Harp, at one point in August, her prize-winning pumpkin was growing 33 pounds per day. The folks at Pond Hill Farm show off some of their first giant pumpkins on the screen.