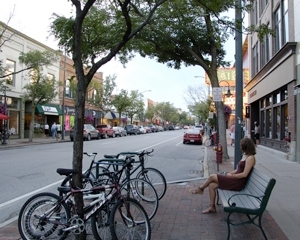 To celebrate Traverse City’s award, the city’s planning director, Russell Soyring, presented Traverse City Mayor Michael Estes with a plaque from the American Planning Association at a gathering on the corner of Front Street and Cass on Wednesday morning October 7th. Brian Crough, Community Development Director, then presented the Mayor with a “Great” street sign, to add to the Front Street signs—and an invitation to install the first one. The mayor climbed the ladder with Crough holding it steady and placed the word "Great" over Front Street on the corner street sign, all accompanied by cheers from the crowd that had gathered for the occasion—including our large group from MyNorth Media. 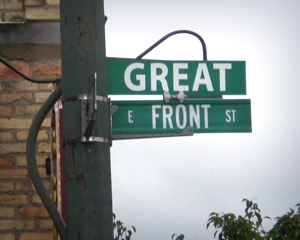 Among the reasons APA singled out Front Street is the way it functions as a “complete street,” accommodating all users equally well—pedestrians, cyclists, transit riders as well as motorists. Other factors contributing to Front Street’s outstanding character include Traverse City’s on-going commitment to planning, historic preservation and downtown redevelopment.

“Front Street is a model for comprehensive commercial district revitalization. Night or day, Front Street is an entertaining place to be—to watch people, to feel the pulse of community,” said Mayor Michael Estes.

“Building an attractive commercial street is no easy task, nor is filling the street with people” said Planning Director Russell Soyring. “By developing a clear vision and developing a community structure for dedicated individuals to work together, the street has blossomed into Traverse City’s proudest street.”

"To be recognized by the American Planning Association as one of the top ten great streets is a tremendous honor. So many property owners, shopkeepers, citizens and civic entrepreneurs have contributed to a shared vision that sustains us still," says Community Development Director, Bryan Crough.

Through Great Places in America, APA recognizes unique and authentic characteristics found in three essential components of all communities — streets, neighborhoods, and public spaces. APA Great Places offer better choices for where and how people work and live everyday, places that are enjoyable, safe, and desirable. Such places are defined by many characteristics, including architectural features, accessibility, functionality, and community involvement.

“We’re very excited to single out Front Street as one of this year’s Great Streets,” said APA Chief Executive Officer Paul Farmer, FAICP. “It is no small feat to transform a vehicle-dominant thoroughfare into a ‘complete street.’ Front Street is truly a model worth emulating, and we commend city leaders, business leaders and citizens for this accomplishment,” he added.

Platted in 1852 by Traverse City founder Perry Hannah, physical changes that helped to redefine Front Street as the city’s downtown “living room”—12- to 14-footwide sidewalks, 8-foot curb “bump outs” that narrow the roadway and help slow traffic, and pedestrian crosswalks every one-third block—did not begin until the mid-1970’s.

It also was during the 1970’s when the City Opera House, built in 1891 and the oldest of three such Victorian opera houses in Michigan, was placed on the National Register of Historic Places. Some $8.5 million in private donations and public funding has been invested in historic restoration along Front Street since then.

Another reason Front Street functions a lot like an outdoor living room for visitors and residents is the Jay Smith Walkway pocket park. The park provides a place to sit, relax and people watch while children play with the fountain. Also near Front Street and the pocket park are historic residential neighborhoods, a public transit center, Boardman River, Clinch Park and Zoo, Lake Michigan’s West Grand Traverse Bay waterfront and a regional trail system.

The city also encourages smart growth along Front Street. Buildings downtown that offer a mixture of uses, such as retail stores on the ground floor and office or residential space on upper floors, are encouraged. Those that designate at least 20 percent of their space for residential uses can add one additional story in height.

These and other changes make Front Street one of the most popular places not only during the city’s National Cherry Festival and Traverse City Film Festival, but throughout the year.

This year’s Great Places in America will be celebrated as part of APA’s National Community Planning Month in October 2009; for more about the special month, visit www.planning.org/ncpm.