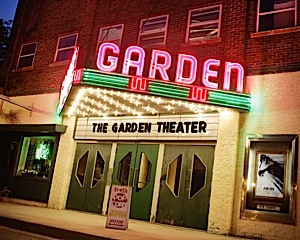 The newly restored Garden Theater in Frankfort, Michigan, 30 minutes southwest of Traverse City, will debut an international film festival October 23–25. The 2009 event will feature the best films from prestigious film festivals from around the world. The Garden Theater’s mission is to screen exceptional cinema offerings in addition to first run films. The 2009 inaugural festival will begin this legacy.

Confirmed films in the inaugural festival include:

Eight to 10 films, most of them feature length, will be included in the festival, with many of the titles shown multiple times over the three-day weekend.

Find more information about the line-up at www.frankfortgardentheater.com.

The Garden Theater was recently purchased by a community-based ownership group of families motivated to restore the theater to its original glory of the Art Deco period of the 1920’s. It was built in 1923 and has been in continuous operation since that time. Sponsorships are available for the Film Festival for between $100 and $500. Businesses and individuals interested in involvement may contact by phone at 231-631-0575, info@frankfortgardentheater.com.