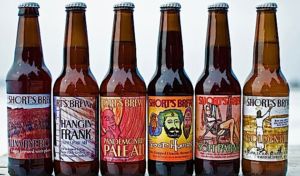 First of all, when it comes to brewing beer, it might not be all about hops, but it’s a lot about hops. Or more specifically, hops strategy. Put hops in at the beginning of a 60-minute boil and you maximize the bitterness. Add hops in the middle or end of the boil or even when it goes into the cold conditioning tank, and you move along the scale away from bitterness and toward more flavor and delicacy of the hops aroma.

Brewers experiment with these basic hops principles endlessly—fiddling with how much hops to add and when to add it. What that means for you, microbrew devotee, is many good reasons to taste the multitudinous variations on hoppy beers that our Northern Michigan microbrewers are serving these days. For microbrew newbies, IPA is crafted to celebrate the hoppy flavor gestalt.

Map out a strategy, like over a long weekend, that will take you to the taps of Northern Lower Michigan microbrewers, and do a taste test to find your favorite hops-celebrating IPA. Arranged from south to north, each brewmaster shares the inside scoop on their microbrew’s IPA:

Brewer Tom Buchanan: Our IPA is right on, not overdone, very palatable. You are very aware of the hop character but not overwhelmed by bittering units. I like it with our beef tenderloin salad.

Brewer Kim Schneider: I do an IPA that’s a cask-conditioned ale, served 45 degrees out of the tap, in traditional English style. It’s naturally carbonated, so not quite the carbonic bite of forced carbonation. I like it with a fiesta salad.

Brewer Mike Dwyer: My IPA is more hoppy in the finish, I balance the bittering with the malt, so it’s not as bitter as IPAs traditionally are. I pair it up with some spicy barbecue sauce on our ribs or a pulled pork sandwich, something that’s kind of aggressive itself.

Brewer John Niedermaier: We have many IPAs and hop heads would like any of them. One of my favorites is Dead Kettle IPA, the first IPA I made here.

Brewer Mike Hall: The Jolly Pumpkin Restaurant and Brewery is the seventh microbrewery that Hall has opened for the company. He suggests the Diabolical IPA as a nice introduction to their brew line-up. One of Hall’s favorite menu items: truffle-seasoned French fries with aioli dip.

Brewer Joe Short: Our Huma-lupa-licious (humulus lupulus) is our signature hoppy beer and flagship best seller (now available in six
packs), and another big hitter for hop heads is Hangin Frank. I like an IPA with our Jammy Pac, a Greek salad wrapped in a tomato herb tortilla.