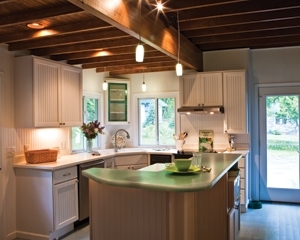 Get Tickets to the Ultimate Up North Kitchen Tour in advance for $10, now.

One summer when he was a teenager, John Fagan stayed with friends in their circa 1913 cottage on the south arm of Lake Charlevoix. The vintage Northern Michigan cottage was simple and honest with open stud walls built of warm, beautiful wood.

Even when he married and moved to California, John never forgot that cottage and the way the morning light played off the lake—or the kitchen remodel that summer that updated the antique cottage kitchen to a cramped galley with a window over the sink that looked into an attached laundry room/porch—not out into the lush Northern yard.

Even after he and his wife, Lynn, moved to Lake Tahoe, California, they’d bring their family to spend two weeks a summer renting a cottage several doors down from the one John stayed in as a teenager. Then one summer they noticed a For Sale sign in front of the old cottage. Eventually they bought it and for eight years basked in idyllic summers at the cottage—and endured the 1970’s kitchen. 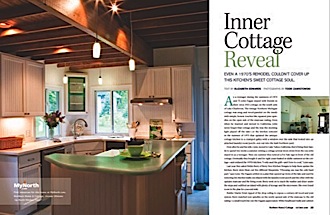 “I only used the grill—and I love to cook,” Lynn says.

Last year they asked Robin Berry of Berry Nice Kitchen Designs to help them update the kitchen. Berry drew them out five different blueprints. “Choosing one was the only hardpart,” says Lynn. The Fagans settled on a plan that opened up views of the lake and yard by removing two kitchen walls: one shared with the laundry room/porch and the other with the upstairs staircase and the living room. Berry went on to stack the washer and dryer under the steps and outfitted an island with plenty of storage and the microwave. She even found room in the plan for a second sink.

Builder Marty Ernst ripped of the drop ceiling to expose a century-old wood and joist system. White beadboard walls and cabinet doors, and a fir floor washed with a blue stain round out the vintage cottage feel. Lynn says everyone loves the flow and feel of the new kitchen—and that she’s not grilling everything anymore.

Don’t Miss this kitchen on the Ultimate Up North Kitchen Tour
October 24, 2009.
One Day, 25 Kitchens! Get Tickets Now
X
X