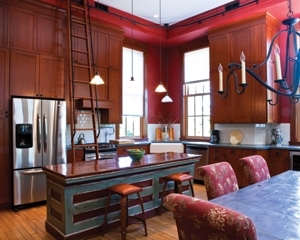 This Traverse City kitchen is one of 25 kitchens on display during the Ultimate Up North Kitchen Tour, Saturday, October 24. Click for more information and to buy tickets in advance.

John Staten laughs when he tells the story of how he and his wife, Diane, came to own a unit in Building 50, the largest of the gracious 19th-century Victorian Italianate-style buildings in The Village at Grand Traverse Commons—the 63-acre former Traverse City State Hospital complex that developer Ray Minervini has engineered into one of the most massive historic preservation and adaptive reuse redevelopments in the country.

The Statens still lived in the Detroit area when Minervini, a longtime friend of John’s, launched the Commons renovation in the summer of 2000. “He called I don’t know how many times asking me to come and see the project and maybe give him a hand,” says Staten, who is a carpenter. “Finally I said I’d come for two weeks. I did and I’ve been here five years now.” 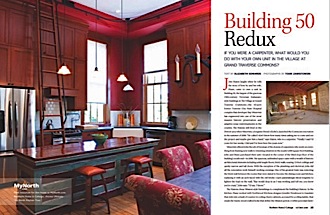 Get the full feature with photos of this Building 50 Redo! Buy the October 2009 issue of Traverse and get Northern Home & Cottage with the Building 50 feature!

Minervini offered John the job of foreman of the fleet of carpenters who work at the complex. Eventually, John and Diane purchased their unit. The spacious, unfinished space came with a wealth of historic architectural elements including solid maple floors, brick walls and soaring 13-foot ceilings. John did most of the renovation work himself. One of his greatest feats was removing the brick wall between the rooms that were slated to become the dining room and kitchen, replacing it with an arch faced with the old bricks—each painstakingly sliced longwise to lighten the load on the wall.

The Statens chose Mission style furnishings to complement the building’s history. In the kitchen, Diane worked with Northwood Kitchens designer Jennifer Henderson to translate that style into a bank of counter-to-ceiling cherry cabinets, accessed by a rolling ladder, that exude the warm, wood-crafted looks that define the Mission period. A white porcelain farmhouse sink helps play out the vintage look, while stainless appliances are a crisp foil.

If a recent and very successful dinner party for 35 (“We just pushed back the couch,” John says) is any indicator, the Statens’ new kitchen is writing its own rich history.

Resources the this Building 50 Redo

Don’t Miss this kitchen on the Ultimate Up North Kitchen Tour
October 24, 2009.
One Day, 25 Kitchens! Get Tickets Now
X
X