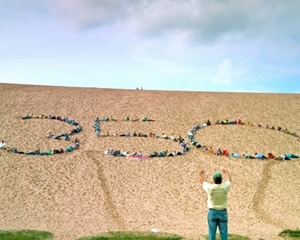 More than 100 countries are taking part worldwide in 350 and the International Day of Climate Action on October 24th, 2009. Local chapter TC350, who put on a successful September event at the Sleeping Bear Dunes National Lakeshore, hopes to create an even bigger 350 display on October 24th at 1 p.m. at the Traverse City Open Space. The public is encouraged and welcome to attend. A 350 rally will take place immediately after at the Opera House and will feature presentations on climate change and what it means locally and for the state. Singer/songwriter Jen Sygit will also perform. Photographer Ken Scott will be high above the Open Space in a cherry picker to document the event. For more information, go to tc350.org.

The previous global warming awareness event was held on September 26, 2009, when some 100 people dressed in greens and blues and other bright colors climbed the Dune Climb at Sleeping Bear Dunes National Lakeshore and spelled 350 in giant numerals on the face of the dune. The occasion was a photo/video session to raise awareness about global climate change. From his picnic-table perch at the base of the dune, Michigan Land Use Institute’s Jim Lively directed the group to stand up, sit down and wave—all while Leelanau County photographers Ken Scott and Keenan May recorded the event. Watch the video Ken Scott made of the event. The song that accompanies it is “350 Getdown,” written and performed by Michigan’s own May Erlewine.

Why 350? The world’s leading climatologists agree that 350 parts per million of carbon dioxide is the safe upper limit that the atmosphere can handle in order to sustain life on the planet and reverse the trend toward global warming. We’re currently at 390 parts per million. 350 organizers say worldwide awareness and support for climate change is needed for when United Nations leaders meet to discuss a climate treaty in Copenhagen, Denmark on December 12, 2009. 350.org.