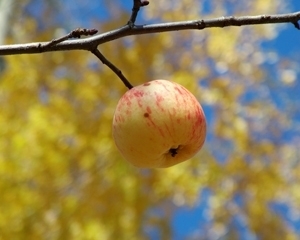 There’s not much wrong in Clam Lake Orchard today. A buttery late-September sun is drenching this 20-acre U-pick/we pick farm sprawled over the hills between Clam and Torch lakes. More than half of the orchard’s 30 varieties (Fuji, Honeycrisp, Gala, you name it, it’s grown here) are ripe, so the picking is good. And it’s easy too, because the trees are dwarf varieties—not more than 10 feet tall. So easy that my 90-year-old grandmother and 4-year-old son have both filled a half-bushel basket in 20 minutes.

And therein is the only hitch. What are we going to do when the car is full? It’s a problem Dick Brown, the farmer who owns Clam Lake Orchard, has seen before. And he smiles when he sees families pulling down his dusty road, their car seats covered in apples, their trunks tied shut with ropes.

Brown started his orchard a quarter century ago as a retirement hobby after a career in sales. Over the years, he’s watched the towering old apple tree with its generous canopy become a thing of the past in Michigan, replaced by dwarf and semi-dwarf varieties. As Brown well knows, there are good reasons for the change: the small trees produce as much fruit as traditional-sized trees, are easier to prune and pick, and they bear fruit in half the time of traditional trees.

Dwarf trees have made some of the work of apple farming easier, but competition from other markets has made surviving in the industry tougher. Michigan traditionally ranks third in apple production, on the heels of New York and well behind Washington, the longtime powerhouse in apple production. But in the last 10 to 15 years Chili, Argentina and especially China have all made sizable dents in the United States’ market, keeping prices low for American growers. “The price I get for processing hasn’t changed in 25 years,” Brown says with a resigned nod of his head toward his orchard.

For all the ups and downs in the apple industry, Brown believes in his product more than ever, especially in light of research showing apples are high in antioxidants and pectins—nutritional qualities that can help fight everything from cancer to high cholesterol. And while he believes any apple is better than eating no apples, he is equally adamant that nothing beats the flavor of a Michigan apple. “It’s a better tasting product,” says Brown. One big reason for the flavor is that Michigan growers tend to let their apples ripen on the tree, which fosters higher sugar contents.

Michigan apples can afford to linger in the sun because most of them are marketed in the Midwest. Apples shipped across the country, or overseas, on the other hand, are picked early so that they’ll ripen en route to their destination.

Geography is another flavor ingredient. In Western Michigan, where the majority of the state’s apples are grown, the Lake Michigan controlled climate and the glacier-made topography and soil work their magic on apples—just as they do on cherries and grapes. Finally, Michigan growers offer at least 25 varieties of commercially grown apples, more shapes and sizes than you’ll find anywhere else. If you can’t find a Michigan apple you like, you don’t like apples.

Faced with tough market conditions but blessed with, yes, the best apples in the world, more and more apple growers are peddling their product directly to the consumer at roadside stands, farm markets or U-picks. It’s a win/win situation. Apple eaters find a fresh product, low prices and sometimes an opportunity to chat with the farmer. Farmers don’t have to pay a middleman, and they have the pleasure of watching folks delight in their product. And people, especially children, are what Farmer Brown likes best about his work. So much so, that he and his wife, Janet, take digital photos of the children who come to pick to give to their parents. “Nothing pleases me more than to see a bunch of little kids out here picking. They’ll remember it for the rest of their lives,” he says.

Northern Michigan’s apple season runs from early to mid-September (depending on the weather) through October. Clam Lake Orchard is open 7 days a week through the season, 10:00 a.m. to 6:00 p.m.. 231-377-7321. Located 5 miles west of Bellaire overlooking Clam Lake.

The Michigan Department of Agriculture publishes a directory of U-pick farms and farm markets or visit www.michiganapples.com.

Wondering what to do with all those apples once you get them home?