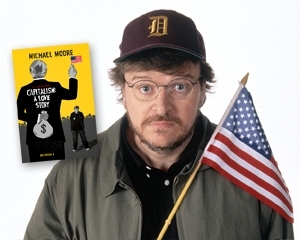 It can never be said that Michael Moore shies away from controversy or backs down from a fight. Yet, when it came time to premiere his newest movie, "Capitalism: A Love Story" he chose the familiarity of his own hometown, Bellaire. And the community responded with more than 500 Northern Michigan residents showing up to share the moment with him in two different screenings last weekend.

"I know what’s in front of me these next weeks and months," Moore said. "That’s why I wanted to watch this with you guys before I’m thrown to the lions."

"Capitalism: A Love Story" explores the causes of the recent worldwide financial meltdown. Like Moore’s earlier films, such as "Roger and Me," and "Sicko," "Capitalism: A Love Story" mixes real people telling their stories with interviews of key players in the financial crisis. Often heartbreaking and, at times, funny, the movie ultimately tries to explore the foundation of capitalism and how, in particular, President Reagan’s era of deregulation and the resulting unabashed greed in the business world have resulted in a compromised free enterprise system and great pain in the lower and middle classes.

Moore and his team produced "Capitalism" in a studio in Traverse City, home to the non-profit State Theater that Moore was instrumental in renovating and also his brainchild, The Traverse City Film Festival. Moore grew up in the Flint area and has watched as Michigan’s unemployment rate hit 15.2 percent, the highest in the nation. Particularly ravaged are the parts of Michigan Moore knew best in his childhood, regions whose prosperity and livelihood were tied directly to the auto industry.

"It was better for us to be here, in the heart of the trouble, instead of in the bubble of New York," said Moore, citing his reasons for producing and premiering his film in Michigan.

The two showings were sponsored by the local Antrim County Democratic Party. "Capitalism: A Love Story" opens on September 23 in New York and Los Angeles and nationwide on October 2.