Getting Lost, And Found, in the Jordan River Valley 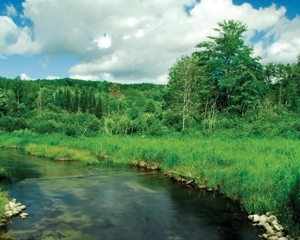 Anyone who has ever hiked a path or passed eighth-grade geometry might be wondering how one manages to get lost along the not-very-convoluted line of a circle. I’m wondering the very same thing.

I’d like to defend myself in saying that each of the large maps that were supposed to be standing along the trail, and which help make sense of the numbered posts on the trail, were missing. I’d also like to add that the Jordan Valley Pathway, marked by blue spray-painted dots on trailside trees, intersects with the North Country Trail, which also appears to be marked by blue spray-painted dots on trailside trees. Furthermore, the North Country Trail appears to break off into several offshoot trails.

Can I be certain of any of this? Absolutely not. Why? Because I had no map.

Wait. Check that. I had a map. But it was the kind of map you download from the Internet one minute after meeting a deadline for one story, and three minutes before dashing out the door to pack your backpack and hit the trail for your next story.

Thus: my map was a small map—8 1/2-by-11 inches, because that’s the paper size in the office printer. My map was also a vague map—basically, the pathway was drawn as a single thin black line, sometimes dotted, sometimes solid—uninterrupted by contours, elevation changes or lines denoting other, intersecting paths.

And that was a shame—not only because it contributed to our being lost, but also because it in no way revealed the fact that the Jordan River Pathway, tucked in the northeast corner of Antrim County, and the valley through which it runs is a luscious, 18,000-acre wild landscape replete with elevation changes (aka ridges and hills) that serve up a couple of the most spectacular vistas in the Lower Peninsula. Nor did the feeble squiggle that stood for the Jordan River in any way hint at the cold, clear, cedar rimmed waterway that is so lovely it became the first Michigan river to obtain the federal designation of Wild and Scenic River. A real map, a beautifully rendered map or even a nice technically accurate one, can somehow suggest the spirit of a landscape, but the lame-o map that I chose revealed practically nothing.

I could bore you with dozen more tales like this. But that’s not the point. This is: I’ve always found my way out. Usually late. Sometimes only after heading back in. Often after turning in several circles. Never after asking directions. And always testing the patience of any who let me lead.

But I do find the way out. And clearly, as I sit here safely typing away, I live to tell the tale. So I feel kind of smug. Unless I’d gotten lost to begin with, what sort of tale would I have? And then, really, what kind of travel writer would I be?

With that in mind, I recommend a two-day hike on the Jordan Valley Pathway, and I do so with the same enthusiasm I felt when we came upon a marvelous view after climbing a hill out of the darkening woods just before sunset on day one of our hike. The hilltop, bathed in pink and gold light, looked as though it had cracked open the sky. A single bench sat under an awning of maple branches. For a few blissful minutes, my guy and I sat there together, cupped in the center of its sway-bottomed seat—hip to hip, hand in hand—watching the fingers of the fading sunbeams trickle across the treetops below.

Then my partner stood up. He had noticed there were no more blue dots on the trees. Was this our trail? He walked farther up the pathway. Came back. Retraced our steps back down the trail toward the woods. Came back again. “This isn’t the trail,” he said.

“I know,” I said, trying to sound concerned. We were lost.