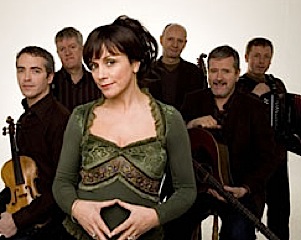 Performers from Beijing to Ireland to Lousianna will take the stage at Milliken Auditorium in Traverse City for the Dennos Museum Center’s 2009-1010 season. Read about new educational programs happening around the series this year as well as pre-concert dinners featuring ethnic foods from the performer’s culture.

What happens when a Mongolian born Punk rocker in Beijing looks to rediscover his traditional cultural identity in modern China?  You get Hanggai. Join us for special night in Beijing as Hanggai takes the stage in an opening season concert by young musicians from Beijing and the Chinese province of Inner Mongolia presenting their interpretations of traditional songs. The word ‘hanggai’ is ancient Mongolian, describing an idealized grassland landscape of mountains, trees, rivers and blue skies. Hanggai “distills everything powerful about Mongolian folk music and makes something new from the ingredients…transcendently powerful music that anyone from anywhere can understand.” (Pitchfork)www.myspace.com/hanggaiband
www.hanggaiband.com.cn

Kevin Locke is known throughout the world as a visionary Hoop Dancer, a traditional storyteller, the preeminent player of the indigenous Northern Plains flute, cultural ambassador, recording artist, and educator. Kevin is Lakota and Anishinabe. His Lakota name, Tokeya Inajin, means “The First to Arise.” While his early instructions were received from his immediate family and community, Kevin has learned from his extended family in every part of the world many lessons in global citizenship and how we each can draw from our individual heritages … and therein create a vibrant, evolving civilization embracing and celebrating our collective heritage.https://www.myspace.com/lakotahoopdancerFunded and supported by the Grand Traverse Band of Ottawa and Chippewa Indians.

Street Drum Corp’s BANG is back for a pre-Halloween fright night performance at the Dennos. Come with your own fright night mask (optional) and join the party as Street Drum Corp’s BANG returns to put on a high octane, adrenaline pumping performance using household items like buckets, kitchenware and aluminum garbage cans while made up in “fright night” makeup and costume. SDC BANG offers a blistering “Punk Rock Stomp” percussion show that will leave you asking for more.https://www.myspace.com/bangsdcThis presentation is supported by the Performing Arts Fund, a program of Arts Midwest funded by the National Endowment for the Arts, with additional contributions from the Michigan Council for Arts and Cultural Affairs, General Mills Foundation, and Land O’Lakes Foundation and by NMC Student Activities.

Proclaimed American music icon and a part of Louisiana folklore and legend, Guitarist-singer Tab Benoit is the real deal. Born and raised on the Louisiana bayou, this self-proclaimed “new kid from the old school” has been the standard bearer for a new generation of Cajun blues musicians – a traditionalist and an innovator at the same time, grafting elements of rock and soul to the indigenous sounds of the bayou.  Join us for an unforgettable night of blues by one of the premier roots musicians of our time as Tab Benoit and his band return to the Milliken stage.https://www.myspace.com/tabbenoitblues

Corky Siegel has earned an international reputation as one of the world’s great blues harmonica masters. He charms the ears off anyone who hears him with humorous lyrics and dazzling good time boogie woogie blues piano. When Randy Sabien picks up his violin, get ready! Together, their swinging sound will have you bobbing your head, tapping your toes, and dancing right out of your chairs! Although Randy’s musical aspirations began by studying classical violin, his direction did an about face the day he discovered he could play jazz on the violin. When he put out his first album, In a Fog, it was received with glowing reviews from Downbeat, Jazz Times, Billboard and others.

We are pleased to welcome back the Whitfield Company from Detroit. Their spectacular concert of Black spirituals and rousing choral music of the Black Church experience with a dynamite backup band brought the audience to their feet with one standing ovation after another during the concert! Whether you are a church goer or not, this is simply not a concert to be missed. The Company has traveled extensively throughout the United States, Canada and Europe and was inducted into The International Gospel Music Hall of Fame in 1999.Dennos Museum

If “Esperanza” is the Spanish word for hope, then Esperanza Spalding could not have been given a more fitting name. She will, in fact, challenge and expand your perceptions of jazz, and might well be the hope for the future of jazz and instrumental music. Blessed with uncanny instrumental chops, a multi-lingual voice that is part angel and part siren, and a natural beauty that borders on the hypnotic, the “20-something” prodigy-turned-pro takes a completely fresh and refreshing approach to jazz by incorporating the rich traditions of soul, pop, world music and so much more.https://www.myspace.com/esperanzaspalding

Made possible in Traverse City by the Wharton Center at MSUwww.whartoncenter.com

Bob James from the United States and Keiko Matusi from Japan, their styles are as different from those legends of jazz’s past as fusion is from boogie-woogie.  James and Matsui are linked to the tradition of what’s called “four-hand piano,” where two players sit down at one instrument and play the  music that was captured in their CD recording Dancing on the Water. They toured the world and garnered rave reviews in 2001, now it’s time to revisit this incredible show in the intimate setting of Milliken Auditorium. https://www.imeem.com/berlusconi/music/sSneRDFN/bob-jameskeiko-matsui-ever-after/
https://www.last.fm/music/Keiko+Matsui/_/Ever+After+(Four+Hand+Piano+With+Bob+James)
https://www.wcpn.org/WCPN/jazztracks/24963

Chicago’s premier Grammy Award winning folk music ensemble specializing in Mexican ‘son’ including the regional styles of huapango, gustos, chilenas, son jarocho, and more, bring what the Chicago Reader calls “a dazzling array of Mexican folk-music forms with a preservationist’s care, bursting with energy.” Sones de México’s demonstrates how immigrant musicians outside of their home country can not only preserve traditions but push them in new directions. The group dips into Mexico’s vast and underexposed son repertoire and integrates everything from rock and folk, to Western classical, providing a musical antidote to limited perspectives on Mexican culture.https://www.myspace.com/sonesdemexico
www.sonesdemexico.com/

The internationally acclaimed Nrityagram Dance Ensemble from Southern India transports viewers to enchanted worlds of magic and spirituality with the sensuous flow of Odissi, the oldest of India’s classical dance forms. Surupa Sen’s compelling choreography is the elusive union of meaning and abstraction, set to an original score and performed to live music by a stunning ensemble of female dancers. The New York Times calls it “one of the most luminous dance events of the year!”https://www.nrityagram.org/
https://en.wikipedia.org/wiki/Nrityagram

Made possible in Traverse City by the Wharton Center at MSU  www.whartoncenter.com

What happens when a blue grass and jazz banjo player from Toronto sets out to explore the African roots of his instrument? The answer is Africa to Appalachia, recorded with the African kora (12 string harp) player Mansa Sissko that won the 2009 Juno award winner for World Music album of the year in Canada and Songlines Magazine top 10 world albums in March 2009. Do not miss this unique performance of blue grass meets Africa. Join Jayme Stone and his group blending jazz, bluegrass, African rhythms and anything else that strikes their fancy, with “music that’s difficult to describe, but easy to love." CBC RADIO
https://www.myspace.com/jaymestone

Matthew Ball is "one of the State’s premier blues & boogie-woogie pianists."  With a performance history that includes everything from symphony appearances to blues festivals, this young man is already at the helm of an enviable performance career. Called "the Gen-X arrival to this uniquely American art-form," Matthew is defining a new generation’s contribution to this treasured American tradition. Please join us in wrapping up the 2009-2010 concert season with a great night of piano blues and boogie!https://www.boogiewoogiekid.com/

Pack some food and fun around your Dennos concert!