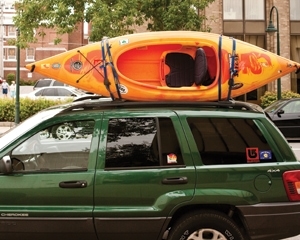 I’m an outdoorsy girl. Chalk it up to a childhood spent idolizing a rough-and-tumble big brother or simply a natural predisposition to dirt, but I’m the sort of chick who doesn’t mind—and actually kind of likes—a little mud between her toes and grit in her teeth. Rough-around-the-edges X chromosome notwithstanding, I’m still a chick. I play hard, but a little frou-frou fabulosity makes me ooze with delight, too. Which is why, when I hear of a four-day kayak adventure where I can paddle down the Chain of Lakes each day, and every night indulge in fine dining, sink into the soft bed of a cozy inn and trust the burden of my ballooning suitcase to the back of some other sucker, I shriek like a sorority girl and immediately ring up my best friend.

One month later, we’re running into each other’s arms in the parking lot of Elk Rapids’ Camelot Inn—the official base camp for our kayak adventure. Though we live just four hours apart, it’s been months since I’ve seen Holly. A pint-sized, perky redhead who cracks up as easily as she cracks the whip in the Detroit accounting firm she markets for, Holly’s the ultimate kayaking partner: fun, fearless, always equipped with sunscreen and ever ready for adventure.

In fact, when we shove off from the shore of Six Mile Lake, the first of the Chain’s 12 lakes and connecting rivers we’ll paddle through in the coming days, I watch her scoot her boat backward out of the shallows—boat wobbling, paddle flailing—and foresee only one problem: Holly’s never kayaked before.

At least, she doesn’t think she has. After shouting yes to my invite last month, she asked a dozen questions about the logistics: food, lodging, luggage handling. And I launched into the list of what was included in the trip: dinner every night, most breakfasts, all lodging and luggage handling, plus a complimentary waterproof camera, an “I paddled the Chain” T-shirt, kayak with paddles and …. Before I could get to the life vests, she interrupted. “Wait, what’s a kayak again?” she asked. “Like a canoe?”

The beauty of the Paddle the Chain Kayak Voyage, the brainchild of Camelot Inn owner Don Weeks, is that just about anyone can do it. Among past trip participants, Weeks counts a 16-year-old and a set of 80-year-old grandparents. The voyage is certainly doable: over four days, we’ll have the opportunity to paddle about 36 miles of the 75-mile chain of interconnected lakes and rivers that S-stretches across Antrim County. Weeks will be standing by to pick up, port and put in our kayaks at different points along the way, which he’s marked on easy-to-follow maps and a detailed itinerary, all of which are safely nestled in waterproof sleeves. Also in our idiot-proof arsenal: a GPS unit and a cell phone. Weeks gave us detailed instructions on using both, right down to a pointed identification of the phone’s red end and green send buttons “just in case anyone’s colorblind.” He’s No. 1 on speed dial.

As we paddle toward the rippling jade of Six Mile Lake’s deeper waters, I try not to worry that I’ve gotten Holly in over her head. Thankfully, in addition to the maps, gadgets and Weeks’s assurances he’d pick us up should the slate sky above break into a storm, Holly and I have chanced upon a pair of lucky talismans: Mike and Lily, the husband-and-wife team who will be trekking with us.

Clearly skilled kayakers, they brought their own boats—long, glossy, sleek affairs that slide across the water like skates on ice. Unlike Holly and I, who aresporting T-shirts, shorts, flip flops and Mary Jane–style Crocs, Mike and Lily are decked out in neoprene shorts and booties, dry jackets, bolerolike life vests and CamelBaks. An array of seaworthylooking stuff is strapped to their boats.

I raise my imitation designer shades and watch Holly take in some technique tips from Mike—a broad-chested guy who, with close-shorn hair and muscled hands, looks more like a Green Beret than a silent sport aficionado.

“The one thing to remember is—” he tells her, then stops short when Weeks yells from shore that we’ve left behind the GPS. Mike wheels his kayak around and tracks back toward shore, his paddle spinning as clean as a propeller. Holly sits in her boat, her paddle still in mid-air, staring after his quickly retreating back. “Hold that thought!” she yells.

We needn’t have worried. Two hours later, the moody sky has surrendered to the late-September sun, and my shoulders and Holly’s have relaxed into a natural, easy stroke. We paddle along, gabbing as though we do this every weekend. With Six Mile Lake and its gawk-worthy houses and floatplanes behind us, we’re meandering through the curvy, quiet river that cuts through St. Clair Natural Area and links to St. Clair Lake. There are no houses here, no powerboats—just pockets of lily pads, bowing reeds and the drip of water falling from our paddles when we pause to take it all in.

Apparently, we pause a lot. Like a mother duck, Mike has circled back twice to make certain we’re still moving forward. He tells us he gets nervous when our constant chatter quiets. We apologize for our noisy prattle and explain that we’ve got lots to catch up on: Holly’s a newlywed; she’s left her anxious husband at home to care for their two recently adopted, behaviorally challenged boxer pups—one of whom already weighs 70 pounds. I’ve just reconciled with my longtime on-again/off-again boyfriend. Both our mothers seem to be menopausal.

Mike shakes his head and reminds us what message Don passed along from Tom and Cindy Tomalka, innkeepers at House on the Hill B&B, whose shore we’re headed to tonight: “Wine is served on the porch at 5:30, whether you’re there or not.”

Continue on to read about dinner at The Rowe Inn, peach-blended butters and headwinds.