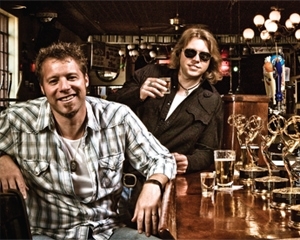 Good things are happening for Jeff (guitar) and Scot Bihlman (drums), the two Benzie-area brothers who make up the Bihlman Brothers band. They have a new recording contract with Warner Chappell Music—one of the industry’s Big Four; seven songs on a soundtrack for a major motion picture; and were part of a team that won an Emmy this year for a documentary about the final recording project to happen in Los Angeles’s legendary Cherokee Studios. We checked in with them to get some back-story on all the positive momentum.

Help us sort through this. What happened first to put these things in motion?

Scot: Well, Jeff and I had taken a hiatus from the Bihlman Brothers for the past three or four years and were each going our own ways. I was doing session work in Los Angeles, and I met Bruce Robb, who owns Cherokee Studios. He was directing the sound on a movie called Love and Dancing, and he heard some Bihlman Brothers and liked our Southern rock sound. Then he asked us to write the songs for the movie. So he is the person who kind of resurrected us. Jeff and I went back to Northern Michigan and wrote 18 songs in two weeks. Then we went back to L.A.and got with the director and the producer and customized the songs for the movie, and they ended up using seven.

Who is in the movie?

It stars Amy Smart, Tom Malloy, Billy Zane and Betty White and was released May 2009.

So step one, get some songs in a major motion picture. Then what?

Jeff: So we were doing the songs for the movie when we learned that this project was going to be the last session to be recorded at Cherokee Studios. This is a seminal recording studio. Everybody has recorded here. Everybody. Sinatra, the Cars, Van Halen, Led Zeppelin, David Bowie, the Beatles. And they were going to be tearing it down. So Cory Adkins of Traverse City’s TV 9&10 pitched Bruce Robb with the idea of doing a documentary on the last project to be recorded at Cherokee Studios. Robb gave the go ahead. We also wrote some new songs that went on the documentary.
Scot: The day after we finished recording the wrecking ball came through. Then the Emmy happened.
Jeff: Right. The documentary is really Cory’s baby. He did the filming and got it nominated. We’re just happy to be a part of it. The awards ceremony just happened to be in Detroit this year—the big movie star Emmy’s are in Hollywood, but the ceremony for the smaller categories, this one was documentary/topical—travels around.

And lastly, how did a deal with a major label fall from all of this?

Scot: While all this was happening, we met Arlo Chan, who is way up in Warner Chappell. He is technically managing us right now, and he has done so much for us, it is really amazing. And I really feel this record—it’s titled What You Want—is great. By far it’s the best record we ever put out. I am very emotionally attracted to this album. It has the blues Southern rock edge, but more singer songwriter, matters of the heart, heartland kind of stuff. Lyrics are deeper. Subject matter is deeper. It’s Americana, but it definitely rocks.

When can we buy What You Want?