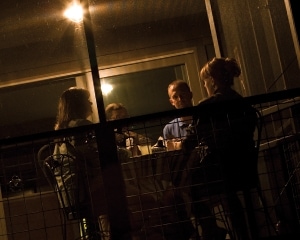 Crickets chirping. Drinks on the deck. Fireflies. Digging for night crawlers. Moths dancing in the porch light. Games of cards on the screen porch. S’mores. Star gazing and skinny dipping. Anyone who has spent a summer night in Northern Michigan knows that twilight brings an entirely different experience, a nightlife spun gloriously around us whether we grab on or not. Our advice? Step out as often as you can into our summer nights and here are some reasons why.

One feel-good bonus to the back-to-basics wave washing over America the Beautiful is the renewal of the family camping trip. And we know we’ve got a plethora of pretty special places on our shining freshwater seas to pitch a tent. Check out this list of campsites that are along the waterfronts of Northern Michigan. (And even though it isn’t for your camping nights, check out this video on how to cook breakfast in a bag over the fire.—Emily Betz Tyra.

Big Top under the Stars

After dinner, the house lights go off and the deck lights come on. Through dining room windows framed by treetops thick with leaves, we thrill to an après-dessert display of amazing powers and outrageous mettle—the flying squirrel circus. One by one, six sleek, light-brown acrobats with furry white chests and giant black eyes sail through the trees, their minuscule bodies, arm flaps and beaver-flat tails propelling their flight from branch to bird feeder, grabbing seeds, gliding back to the branch, racing down the trunk, up the trunk, then back to the feeder, all with exquisite precision and lightning speed.—Patty Lanoue Stearns, PATTYWRITES.COM

Summer is for Euchre

Northern Michiganders love their Euchre, and while we play it anytime, anywhere—by the woodstove at deer camp, after pancakes on winter mornings, on beach blankets under an umbrella—it is best played snug on a screened porch on a late summer night. The night air refreshes, the peanut M&M’s in the bowl provide brain food and the mosquitoes are locked outside (suckers!). Anyone can learn, but, as with any foreign language, it’s best to start early. I did, taking pointers on my uncle’s lap, fidgeting nervously, staring blankly at the suits and bowers, foolishly telling my older brother to “pick it up,” sifting through the sea of diamonds in my small fingers until—finally—I realized I had a God-sent hand and the confidence to go it alone. Check out these snack recipes to spice up the game night fare.—Emily Betz Tyra

The Enlightenment of Hunger

We crouched around the fire, stomachs yowling, doctoring the blisters on our feet with duct tape and a pocket knife. He mentioned karma, and my heart skipped. Did you say caramel? The best thing about going hungry is the bourbon goes faster to your head. We bushwhacked five miles—or was it fifty?—walking in circles looking for a lake where the trout were rumored to be as long as ax handles. By dark all we found was a swamp guarded by angry mosquitoes the size of pterodactyls. I brought the camera and a bottle but forgot the canned goods and the bug spray back at the truck. He smiled as I talked of celestial payback for egregious indiscretions, rising at last when the talk finally turned from cheeseburgers to making a bid for the trailhead in the dark. Surprise! A last season leftover not long from the freezer. It was sealed in a baggie wrapped in newsprint and a sweater, a back strap of venison the size of a python when uncoiled, still cool to the touch. We savaged the meat into hunks and huffing on our haunches like happy baboons speared them over the flames on sharpened sticks. You talk about enlightenment. I’d rather talk of blistered hunger, campfires, meat, juices running down the chin, and basking later in the fullness of Eden lost somewhere in the Northwoods under the stars.—Bob Butz, BOBBUTZ.COM

Beach, park, backyard, riverside, woods after a long summer dusk. The chill announces: autumn is as near as the dark—though not yet—there is time. You stare kindly at the ash-filled basin. You bend to the paper and maple kindling tenderly as an old lover. You strike the match, touch it to old news. Flame reaches out, catches, gathers, flies skyward. Light flickers against the dark, pinning it to trees or starry sky. You add split birch, slowburning oak. Now wait. Watch the coals build, feel opposites; intense heat, chill leaning on you from nightfall. Smoke wings against you, stains your hands with soot, your hair with blue-scented feathers. Step back, settle into the bent lawn chair. Call. They come—friends, children, elders—dragging branches and carrying tokens of thanks—filled red coolers, water, wine, stories. The fire gods accept, ascend to fight the night, and you, safe for now, let them warm body, mind, spirit against the coming cold. For hours, you sit inside the wavering pool a bonfire shapes and watch mystery unfold at your feet, opening its heart, lifting itself into its own ending, its own dust, until at last you fall asleep in smoldering, spent light.—Anne-Marie Oomen

My dad snuck in astronomy lessons on weekends, hauling out the telescope—needed or not—so we could explore constellations, see Mars and Venus, or look at the moon. My favorite lessons were with the whole family down on the deck on Grand Traverse Bay, wrapped in blankets with heads cocked back and eyes glued to the dark sky searching for shooting stars, or what he called meteors. We made it a game to spot the fieryflash first. But when Perseids came in August they came faster than we could call them, so we just sat back and enjoyed the fireworks. Perseids is one of the more famed and favorite astronomical events because of its consistency. Every 130 years the Swift-Tuttle comet rotates the Earth, but every year, the Earth rotates and rams into the debris path left by the comet. The rubble, ranging from the size of sand grains to small pebbles, crashes and burns into the Earth’s atmosphere, streaking across the sky. The Perseids run from the end of July to mid-August, but their peak, with 60 meteors streaming by per hour, happens August 11–14 in the wee hours of morning. Want to see the stars up close but don’t have a telescope. Pop into a public viewing night at Rogers Observatory in Traverse City.—Lauren Marmion

Frankfort-ites run to the Cool Spot, Cedar natives howl at the Blue Moon, Bellaire folks get in line at Ruthie’s Dairy Twist. As for Traverse City
West Siders jonesing for a pull from the soft serve machine, Shirley is their siren. The Dairy Lodge’s sassy blond mascot has been perched on
the sign’s igloo since Al Hepler opened the place in 1958. Current owner Carol Popp says back then, “the kids called her Shirley, after Al’swife.” Shirley became a brunette when the sign was repainted decades later, and a ruckus arose when the sign’s original painter, Mel Timmerman, updated the sign a couple years ago, restoring Shirley’s blond locks. West Siders now stand behind their blond ice queen and the neighborhood spot’s malts and sodas, Koegel’s Vienna hot dogs, Polish sausages and killer sloppy joes, the original recipe that Shirley used in the 50’s. It’s also hard to resist the flurry made with Thin Mint Girl Scout cookies. Say Shirley made you do it. Pick Your Pleasure at the window at 405 N. Division, Traverse City, 231-941-4374.—Emily Betz Tyra

There is no time to think twice. You’ve got about one nanosecond to shimmy out of your suit and hit the water, lest the mosquitoes carry you away, or maybe worse, your neighbors up late at the cottage next door catch a peek. But once you’re in, you’ve entered another world, my friend. On a clear night, you’re practically swimming through the stars: black water blurs into black sky, and there you are in the middle ofit all, wearing nothing but your sun-kissed skin, cutting through the cold water like a warm spoon through ice cream. It’s sexy even if you’re all alone, shocking even if it’s your hundredth time, and the closest you’ll ever feel to flying. The sensation of pure freedom in exchange for just a few millimeters of swimsuit fabric. Now that’s a good deal.—Emily Bingham, EMILYBINGHAM.COM

Summer Is for Love

We spent nearly every night stuck together like bare legs on a hot car seat that first summer. Two kids, tanned from farm labor, dusted withbeach sand and sweat. In tents, boats, cars—and even sometimes a bed; tangled and groping, laughing at games we’d never played before.
In clover-spiced hayfields we spoke of the fall, our separate colleges and how it would work. We talked about the sound a record makes at
the end of the music. We talked about catching bugs in pickle jars. Our tanned bits dissolved into the warm cloud of night; our not-so-tannedbits
burned white-hot in the starlight. That summer was the way it should be; so clean and beautiful and right. Everyone should have that, at
least once, and then be able to hold it, like fireflies in a jar to light and warm whatever may come.—Aaron Peterson is in awe that he still gets to spend summer nights with that gal—and now their new baby. AARONPETERSON.NET.