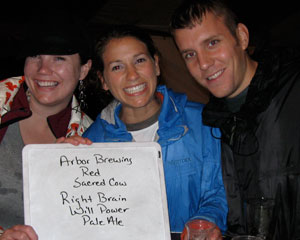 Rain? What rain? The steady drizzle and ocassional downpour didn’t seem to dampen anyone’s spirits at the first-ever Traverse City Microbrew and Music Festival held August 29 at the Grand Traverse Commons. Brewerers’ tents as well as food tents were set up over a large portion of the lawn making the festival feel a lot like a village you could wander instead an event under one tent. Music was filling the spot all through the evening as bands took to two different stages. Bagpipers led a procession through the "village" and finished with a performance under one of the big tents. As nighttime came, all the tents sparkled with white lights and people were dancing in front of the main concert stage. It was fabulous to see such a great crowd come out to support Michigan’s first microbrew community and support Sam Porter’s vision and incredible effort to put together a top-of-the-line festival.

We caught up with a bunch of folks out for the night and asked them to tell us what they’re favorite beers of the night were. Take a look at their votes. You’ll see some names pop up again and again and next year we’ll try to capture some of the comments about why each person loved their choice. For instance, the people who went for Short’s Black Cherry Porter couldn’t stop waxing poetically about "the finish." The other thing you’ll see? A lot of people having a great time. Everyone’s already looking forward to next year.

It was informal and just for fun, but you’re wanting to know "the winners." Here you go:

Number of beers voted as favorites: