Traverse City Film Festival Wraps Its Most Successful Festival Ever 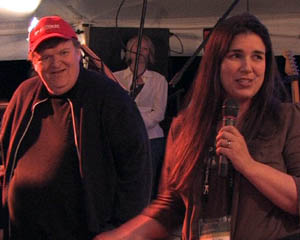 Watch hightlights from the closing night party where volunteers, sponsors, filmmakers and founders celebrated the 5th Annual Traverse City Film Festival, the most successful of them all. And listen as founder Michael Moore expresses his gratitude and announces the 2009 award winners.

This year’s festival marking its fifth anniversary wrapped up with record-setting admissions and turnouts for free nightly films on the waterfront, along with the announcement of a new Comedy Festival to kick off this winter.

More than 96,000 admissions were tallied for the six-day 2009 festival, that’s over 16,000 more than the previous two years, marking yet another milestone for this popular annual event founded by Oscar-winning filmmaker Michael Moore in 2004. The 2009 festival, which ran from July 28 through Aug. 2, included five sessions of a new film school, five daily panel discussions and four parties.

"We started this festival with the idea that if we brought an excellent variety of first-run and independent films to Traverse City, people would come," said Moore. "And they have, in increasing numbers.

"We sold more tickets in the first week of sales this year than we sold during the whole festival in 2008. This has been the best festival yet, with the largest crowds."

In all, audiences were able to see screenings of 71 features and 50 short films representing more than 30 countries and five continents; over 65 percent were sell-outs. Crowds attending free daily panel discussions at Traverse City’s historic City Opera House got to listen to visiting filmmakers explore topics relating to the film industry.

Panelists and visiting filmmakers included the following directors, actors and other industry insiders:

Popular free films on a giant inflatable screen on the bay nightly during the festival attracted huge crowds, including a record-setting 12,000 for a showing of "The Goonies." In total, 40,000 people attended the free movies, which included live pre-movie entertainment with an impromptu performance by Wavy Gravy and Country Joe McDonald of "Woodstock" fame. Paul Kantner also appeared at the nighttime screening of "Woodstock."

Moore and comedian Garlin announced during the course of this year’s festival that they are planning to organize a new Traverse City Comedy Arts Festival. Likely to be held this winter, it will feature a weekend of movies, stand-up and sketch comedy and other entertainment.

"We’ve actually talked to some great people who are going to come to Traverse City for this first comedy festival," said Moore, adding that more details will be released soon. "This is something we have been talking about for a long time."

An inaugural package of races including a Stars of the Mile race for elite runners and 5K Costume Race attracted both participants and crowds along the race routes. That’s all in addition to one-of-a-kind moments like Jeff Garlin’s screening of two new episodes from the coming season of "Curb Your Enthusiasm" and Moore presenting a 20th anniversary showing of his first documentary, "Roger & Me," after which he answered questions from Larry Charles on stage in front of a standing-room-only crowd.

The festival also depended on 1,300 active volunteers, including 120 volunteer managers, to staff venues and run everything from concessions to ticket sales. "That includes people who worked at least 40 hours during the festival, with many of them working 40 hours a week for several weeks leading up to the festival," Lake said.

As part of this year’s fifth anniversary events, Moore also named Susan Brown and Jason Pollock as honorary co-chairs this year and co-founders of the festival. Both were instrumental in running the festival in its inaugural year. In addition, Traverse City filmmaker, Rich Brauer, was named Michigan Filmmaker of the Year.

Coming to Traverse City for the 2010 Film Festivals? Plan your trip now!