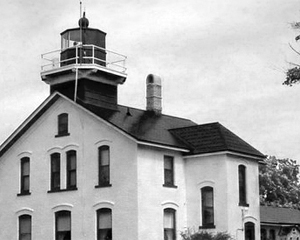 Does the ghost of former keeper-of- the-light Captain Peter Nelson really haunt the Grand Traverse Lighthouse? Spend the day at this circa 1858 landmark on Leelanau Peninsula’s watery tip and decide for yourself. When you’re not listening for creaking floor-boards, climb the tightly wound spiral steps to the lighthouse tower for a view over blue water to the Fox Islands, cover your ears when the fog signal horn sounds, or wander the old keeper’s quarters, restored to 1920’s heyday—two decades after Captain Nelson had gone to his grave.

Tucked between woods and beach in the Leelanau State Park, the lighthouse grounds beg exploring. Whether or not the salty old man makes his presence known, you’ll leave haunted by the beauty of this isolated outpost.

Want to tour more lighthouses? Choose Lighthouses in this Interactive Map and then plot your tour!

Read more about the Grand Traverse Lighthouse before you go: